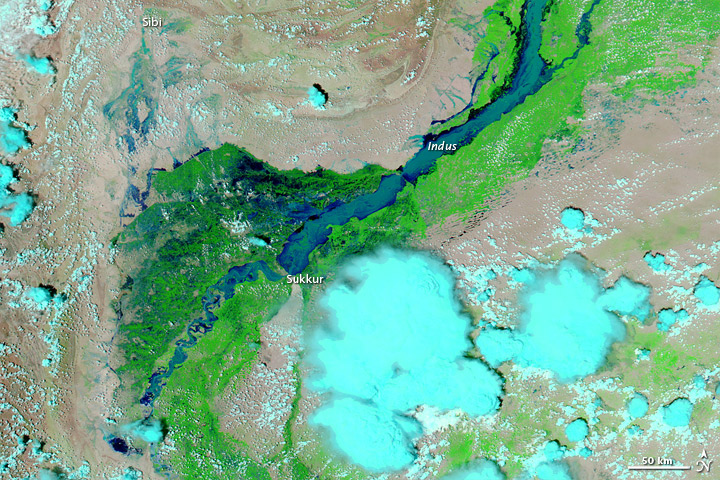 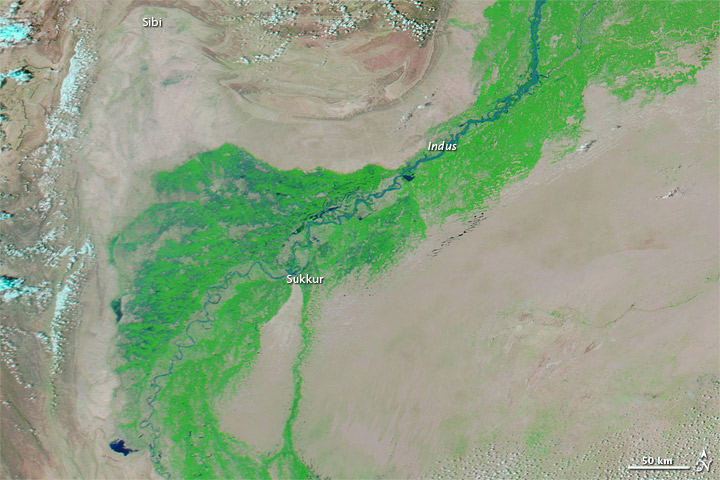 Floodwaters continued rushing down the Indus River on August 10, 2010. The BBC reported that high waters had traveled more than 1,000 kilometers (600 miles), from the northern reaches of the country to Pakistan’s breadbasket in Punjab Province, and on to Sindh Province. In Sindh, two million people had already evacuated.

The Moderate Resolution Imaging Spectroradiometer (MODIS) on NASA’s Aqua satellite captured these images on August 10, 2010 (top), and almost exactly one year earlier, August 11, 2009 (bottom). The images show the lower Indus River, at the boundary of Punjab and Sindh Provinces. Both images use a combination of infrared and visible light to increase the contrast between water and land. Water appears in varying shades of blue. Vegetation is green, and bare ground is pinkish brown. Clouds range in color from pale blue-green to bright turquoise.

In 2009, the Indus appears as a thin river—a braided stream north of Sukkur (where a barrage affects water flow), and a very skinny meandering waterway south of that city. In 2010, the river has completely filled the river valley, merging the braided streams north of Sukkur, and pushing water over riverbanks in places. Northwest of the river valley, around the city of Sibi, standing water is evident on what appears to be normally arid ground. Pools of water also appear due east of Sibi, on the other side of the river.

On August 10, 2010, the Indus River is less swollen south of Sukkur than it is north of the city, but even compared to an image acquired on August 8, water levels downstream from Sukkur appear higher. Early in the day on August 9, the BBC reported, the recorded water flow through Sukkur Barrage was up to 1.4 million cubic feet per second (cusecs). The barrage is only designed to withstand a maximum of 900,000 cusecs.

According to Agence France-Presse, United Nations Office for the Coordination of Humanitarian Affairs stated that the scale of destruction from Pakistan’s monsoon flooding in July and August of 2010 surpassed the devastation from the 2004 Indian Ocean tsunami, the 2005 northern Pakistan earthquake, and the 2010 Haiti earthquake combined.

Flooding along the Lower Indus River

Acquired August 8,10, and 12, 2010, these false-color images show a substantial rise in water levels on the Indus River downstream from Sukkur, Pakistan.