Flooding along the Lower Indus River 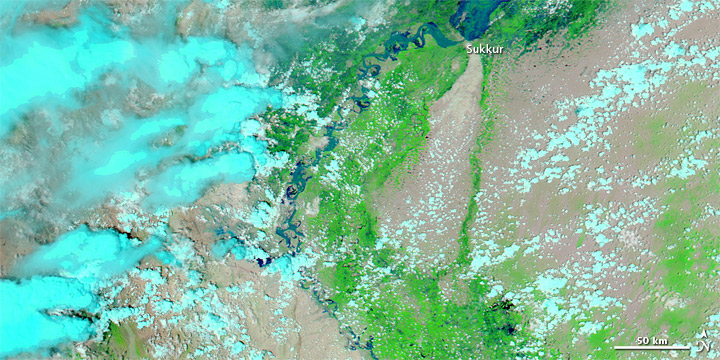 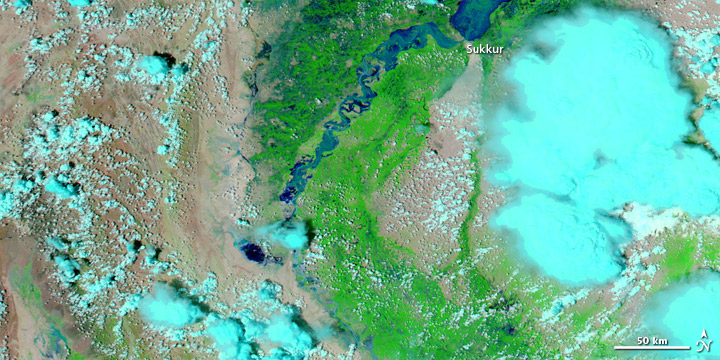 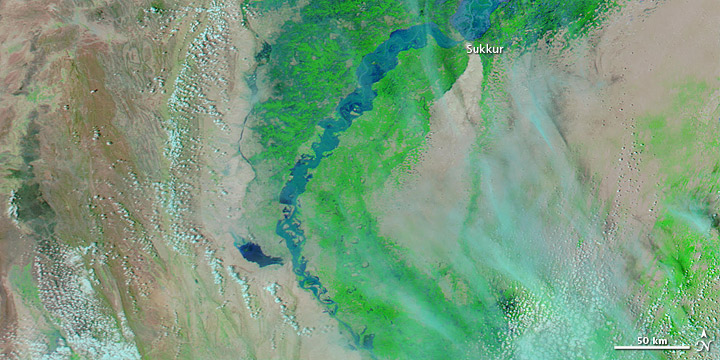 All three images use a combination of infrared and visible light to increase the contrast between water and land. Water appears in varying shades of blue. Vegetation is green, and bare ground is pinkish brown. Clouds range in color from pale blue-green to bright turquoise. A thin veil of clouds hangs over much of the region on August 12.

On August 8, even though the lower Indus has risen far above its typical levels, it still appears as a relatively thin braided stream south of Sukkur. On August 10, the river has widened south of the city, and on August 12, the Indus has risen even more. Compared to the previous two images, the water appears fairly light in color on August 12. This may result from the angle of sunlight or from cloud cover, but might also result from an increased sediment load in the water.

The BBC reported that the Sukkur Barrage was facing a far greater water flow than it was intended to accommodate. Early in the day on August 9, the recorded water flow through was up to 1.4 million cubic feet per second (cusecs), and the barrage is only designed to withstand a maximum of 900,000 cusecs, the BBC said. David Petley of Durham University produced a graph of water flow at Sukkur from late July through early August 2010. Although not showing water levels as high as 1.4 million cusecs, Petley’s graph indicated a rise in the water flow rate beginning August 4, and water flow remaining above 1 million cusecs through August 11.

Acquired August 8,10, and 12, 2010, these false-color images show a substantial rise in water levels on the Indus River downstream from Sukkur, Pakistan.