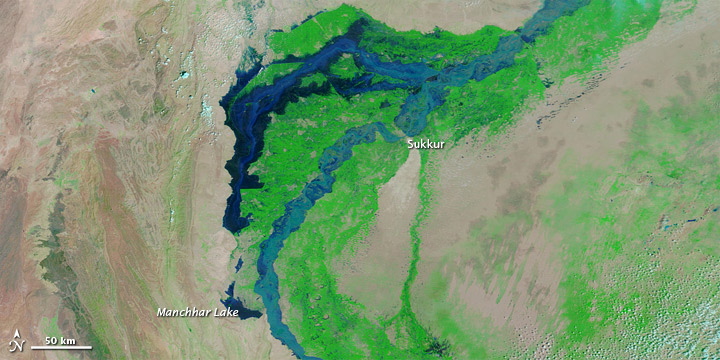 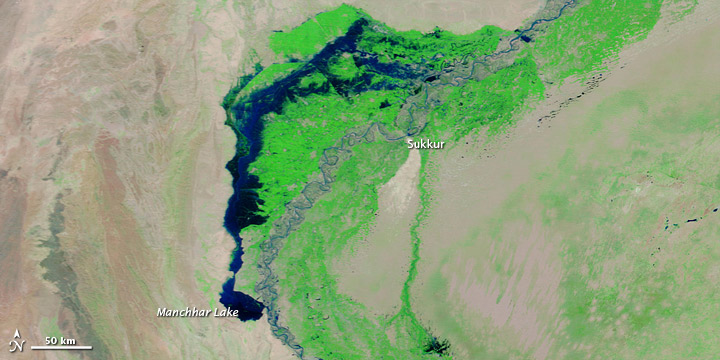 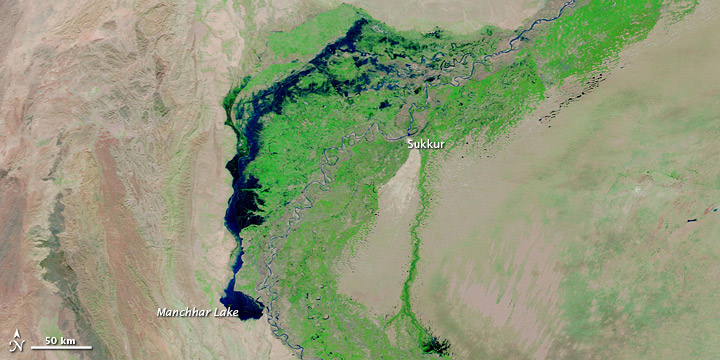 More than three months after floods first struck Pakistan, waters still lingered west of the Indus River. At the beginning of November, the high waters were receding, but only slowly.

Acquired by the Moderate Resolution Imaging Spectroradiometer (MODIS) on NASA’s Terra satellite, these false-color images show a portion of the Indus River and irrigated land to the west. The images document the formation of a massive floodwater lake terminating in Manchhar (or Manchar) Lake.

All of these images use a combination of infrared and visible light to increase the contrast between water and land. Clouds appear in varying shades of light blue-green. Vegetation is green, and bare ground is pinkish brown. Water varies in color from electric blue to navy.

The first image is from September 3, 2010, after floods had devastated much of the country. Water flow in the Indus River narrowed at Sukkur, but water filled the river valley north and south of the city. Thanks to a dam failure north of Sukkur, vast amounts of water were channeled west of the river and covered areas that are normally cultivated or settled land. Manchhar Lake, typically an isolated water body, remained detached from flood waters to the north.

The middle image is from October 2, when Indus River’s levels had fallen back to near-normal levels. The river valley appeared mostly free of vegetation, perhaps filled with saturated mud. While water levels had fallen in the Indus, a massive floodwater lake formed a giant arc west of the river, extending from north of Sukkur to Manchhar Lake.

The bottom image is from November 1. Compared to the month before, water levels have fallen in the floodwater lake, but only slightly. Manchhar Lake remains connected to flood waters to the north.

On October 29, CNN reported that large areas in Pakistan’s Sindh Province remained underwater and some 7 million Pakistanis still lacked adequate shelter. Despite the prolonged hardship, Oxfam stated that international aid was dwindling. On November 1, the International Committee of the Red Cross reported that although the threat of waterborne gastrointestinal disease was receding, the threat of mosquito-borne disease (such as malaria) was rising because of stagnant pools of water in low-lying, poorly drained areas. Large areas of inundated cropland also increased the hazard of malnutrition.