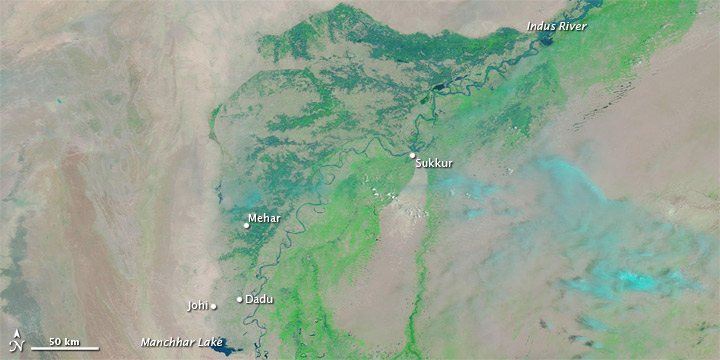 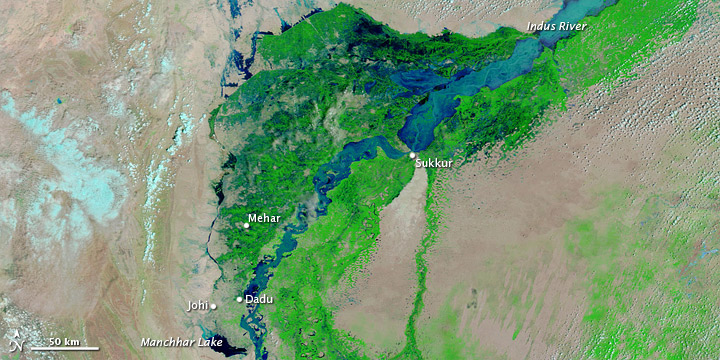 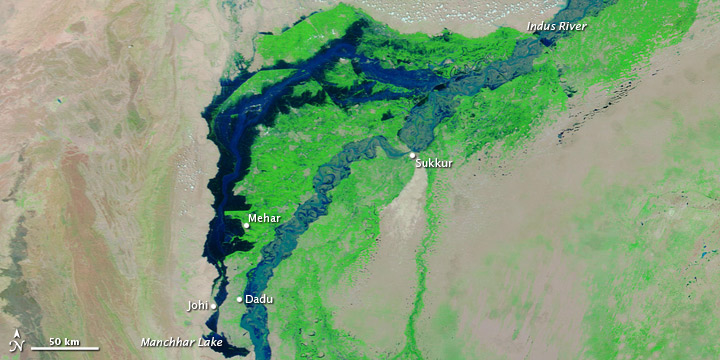 The Indus practically spawned a parallel river in Sindh Province by early September 2010. A dam breach upstream caused the waters of the Indus to diverge in August. While water remained in the main river channel and flowed toward the Arabian Sea, some water flooded agricultural lands and settlements to the west, ultimately pouring into Manchhar (also spelled Manchar) Lake, according to news reports. Flooding had already ravaged several settlements, including Mehar. Authorities feared that floodwaters would breach embankments and inundate the town of Johi and the nearby city of Dadu.

These images from the Moderate Resolution Imaging Spectroradiometer (MODIS) on NASA’s Terra satellite show the bend in the Indus River where waters diverged during the 2010 monsoon season. The images span a 50-day period from July 19, before flooding was apparent along the lower Indus to September 7, after flood waters extended to Manchhar Lake.

These images use a combination of infrared and visible light to increase the contrast between water and land. Water ranges in color from electric blue to navy. Vegetation appears bright green. Bare land ranges from pink-beige to brick red. Clouds appear pale blue-green.

In the image from July 19, the Indus River is confined to thin, braided channels. A network of irrigation structures provided water for agricultural fields west of the river. Dry land surrounds Manchhar Lake and the settlements in the region.

In the image from August 11, the swollen Indus River fills the entire river valley north of the city of Sukkur, where a barrage (a type of dam) modifies water flow. Even south of Sukkur, the river is discernibly swollen. West of the Indus, a long, thin, north-south water channel almost reaches Mancchar Lake.

By September 7, the new river to the west rivals the width of the Indus. The unbroken water body diverges west from the Indus and south all the way to Mancchar Lake, nearly rejoining the Indus again. The new river’s dark color, compared to that of the Indus, suggests depth, but this could result from the angle of the Sun, or from a greater sediment load in the Indus River.

On September 6, Agence France-Presse reported that flooding had destroyed 3.6 million hectares (8.9 million acres) of Pakistan’s productive farmland. In the wake of the floods, Pakistan faced a three-pronged threat to its food security because seeds, crops, and incomes had all been affected.