High Waters along the Pakistan-India Border 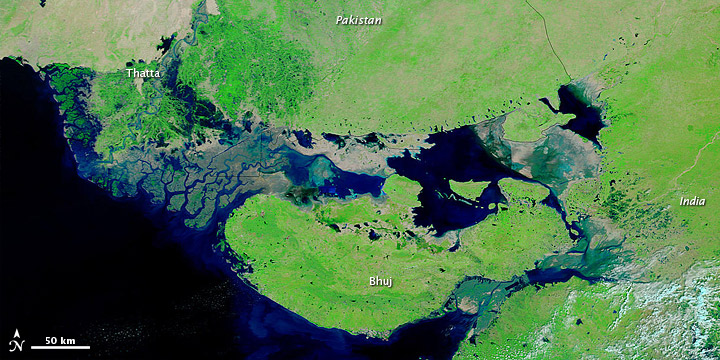 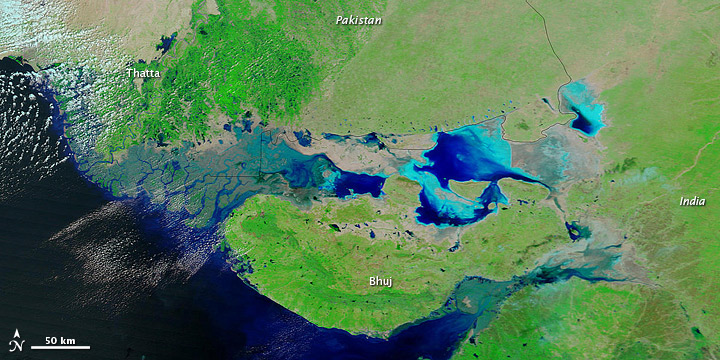 Just inland from the Arabian Sea, wetlands line the border between Pakistan and India. Water levels rise and fall with the seasons, but after weeks of devastating monsoon rains that displaced millions of Pakistanis, water levels in the typically shallow lakes stayed high in late summer 2010.

Both images use a combination of infrared and visible light to increase the contrast between water and land. Vegetation appears bright green. Bare land appears pink-beige. Clouds are pale blue-green. Water ranges in color from electric blue to navy. Lighter shades of blue, indicating shallower depth, predominate in 2009, and deeper shades of blue predominate in 2010.

Between 2009 and 2010, the difference is most dramatic north and northeast of the city of Bhuj. In fact, the land around Bhuj looks more like an island than part of mainland India in 2010, and small pools of standing water surround the lakes.

Flood waters had begun to recede along the Indus River by late September, although high waters remained in a massive floodwater lake west of the Indus, terminating in Manchhar Lake. Although waters were subsiding, health and food security concerns were not. On September 24, 2010, Agence France-Presse reported that the United Nations asked for $180 million to feed six million flood victims through the end of 2010.