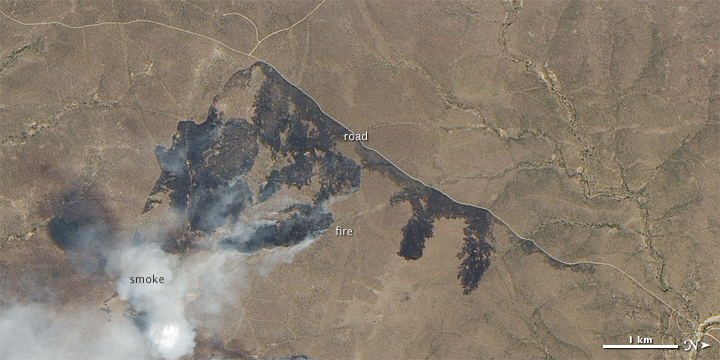 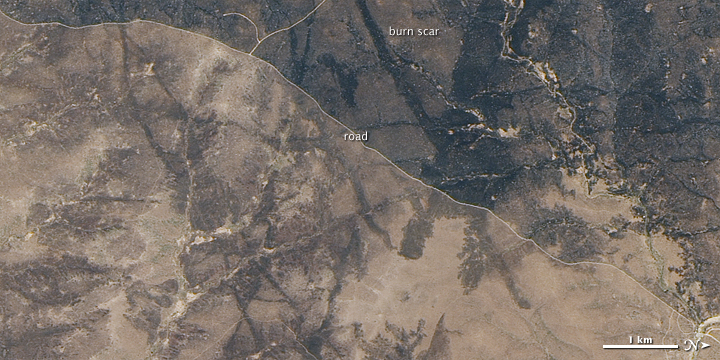 As iconic as Yellowstone National Park is to the United States, Kruger National Park is to South Africa. The park preserves a diverse landscape, historical sites, and a rich array of African wildlife. And just as in Yellowstone and other parks, land managers in Kruger are facing difficult decisions about if and how to preserve ecosystems in the face of a changing climate.

These images, taken by the Advanced Land Imager on NASA’s EO-1 satellite, show an experiment that tested the effectiveness of intense fire in controlling brush, which may increasingly encroach on grasslands as climate changes. Fire has long been an important natural force in maintaining the savanna, allowing the co-existence of trees and grass.

The top image, from July 31, 2010, shows a low-intensity fire in southern Kruger. The landscape is a combination of open grasslands, thickets of brush, and tall trees. In the images, the grasslands are an even tan color, while areas where woody brush is dense have a darker brown color.

Park managers set the fire to clear potential fuel around the edges of an area they intended to burn with an intense fire later in the year. On September 15—when weather conditions were suitable for high-intensity fire—the burn area was surrounded with dark charred land that would prevent spreading.

The next time the EO-1 satellite flew over Kruger on September 18 (lower image), the firestorm had occurred and the fire was out. Roads and waterways neatly define the fresh burn scar, indicating that the fire stayed under control as planned. The newly charred land is considerably darker than the older burns. The image will help park managers assess the impact of the burn and the potential for using intense fire as management tool elsewhere in the park.

Park managers believe heterogeneous landscapes—with variations between thick woody brush, forest, and open grassland—are good for the park because they provide a wider range of biodiversity, says Navashni Govender, program manager for fire ecology and biogeochemistry in Kruger National Park. However, some field data show that woody vegetation may be increasing. Most tree and bush species in the savannas are adapted to fire, so conventional low-intensity fires do little to reduce the woody vegetation. Park managers had to find another solution to maintain open grasslands.

A possible strategy for maintaining diversity is to set more intense fires that could burn and thin the brush. Land managers traditionally set fires under cooler and more humid climatic conditions, when the fires are much cooler, less intense, and easier to control. In 2010, park managers decided to start a raging firestorm in hot, dry weather to see how effective it would be in clearing out encroaching woody vegetation. The black burn scar seen in the September 18 image is the result of the intense fire. 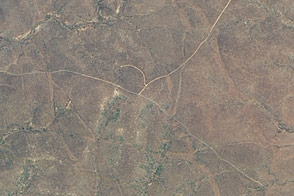