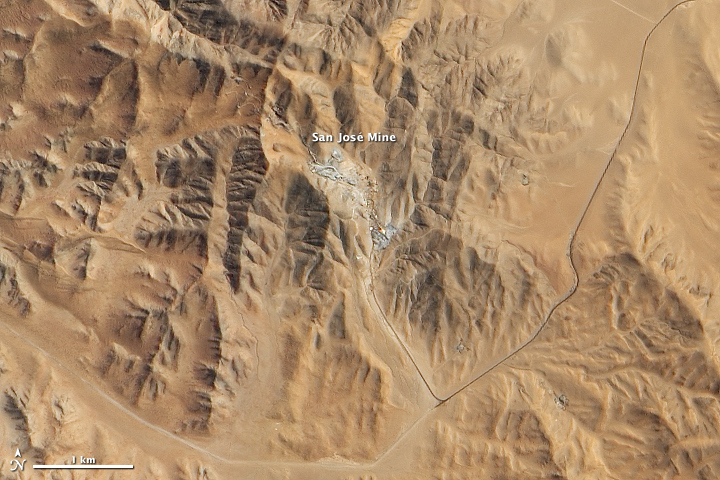 In early August 2010, Chile’s San José copper and gold mine collapsed, trapping 33 miners underground. Seventeen days later, the miners’ friends and families were overjoyed to learn that the men had survived. However, the good news came with a caveat: rescuing the miners might take months. They would be an isolated group, living in close quarters, in a potentially deadly environment.

Although they work far above—not below—the surface of the Earth, NASA astronauts endure similar isolation and cramped spaces. In a small contribution to the rescue effort, NASA dispatched a four-person team—two physicians, a psychologist, and an engineer—to Chile to provide support. Invited by the Chilean government, NASA administrators hoped that the agency’s expertise in preparing for emergencies in human spaceflight and sustaining life in a hostile environment could provide benefits to the miners.

The San José mine lies north of Copiapó, Chile, in the world’s driest desert, the Atacama. The Advanced Land Imager (ALI) on NASA’s Earth Observing-1 (EO-1) captured this natural-color image of the mine and its surroundings on September 16, 2010. The mine complex appears as an uneven patch of gray in the midst of camel-colored hills devoid of vegetation. Parts of the Atacama have received no precipitation since recordkeeping began.

As of late August 2010, just two 700-meter (2,300-foot) passageways, each about 23 centimeters (9 inches) in diameter, connected the miners with the world above. Through those tubes, rescue workers could pass food, water, medicine, telephone lines, letters between miners and family members, and games to help pass the time. Before their discovery, the miners had fashioned their own dominoes and opened an underground casino to keep up their spirits.

Before their discovery, the miners kept themselves alive by rationing supplies—about a tablespoon of tuna and ounce or two of milk per day. After 17 days, many were close to starvation. James Polk, one of the NASA physicians visiting the site, explained that providing food to people who had been starving is complicated and must be done cautiously. A rapid reintroduction of calories can cause metabolic changes that quickly turn life threatening.

Equally challenging is the emotional ordeal of spending months in a small group in a confined space. Even before they were found, workers had organized themselves into groups and focused on tasks that would contribute to their rescue, including maintaining their section of the mine and the mining equipment, and mapping their location. The NASA team concluded that the miners and their families were setting an example of resilience. The Chilean government, meanwhile, mounted a rescue operation of unprecedented scope.

Acquired September 16, 2010, this natural-color image shows Chile’s San José copper and gold mine where a mine collapse trapped 33 miners.