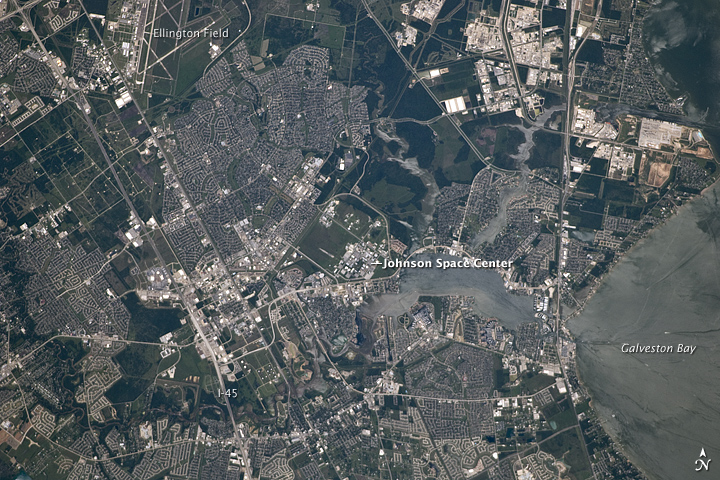 This detailed astronaut photograph is centered on the NASA Lyndon B. Johnson Space Center (JSC), located in the southeastern Houston metropolitan area. The facility was established in 1961 as the Manned Spacecraft Center and renamed in honor of the late U.S. President Johnson (a Texas native) in 1973. JSC serves as the lead NASA center for both astronaut training and mission control of manned spacecraft—such as the International Space Station (ISS) and Space Shuttle—and has done so throughout the history of the U.S. manned space program. The Center also collaborates with other NASA and international partner facilities in a variety of scientific and engineering programs related to human space flight and planetary exploration.

JSC is located approximately midway between downtown Houston and Galveston, and is bordered by several smaller municipalities that form a mosaic of urban and suburban land use (grey areas with street grids, and commercial/industrial areas characterized by white rooftops). Large tracts of grassy fields and forests in the area (light to dark green respectively) include nature preserves, grazing lands, and flood control areas. Also visible at image upper left is Ellington Field. This airport services a variety of NASA aircraft used for astronaut training, scientific, and cargo transport purposes.

Clear Lake, an inlet of Galveston Bay, is located to the immediate southeast of JSC. Both Clear Lake and Galveston Bay appear silver-grey due to sunglint, or light reflected back towards the observer on the ISS that gives the water surface a mirror-like appearance. Several boat wakes are visible in Galveston Bay (image right) due to disruption of the water surface that reduces the sunglint effect.

Other astronaut photographs also feature the Houston and Galveston Bay area, including images of Houston at Night and the Houston Ship Channel area.

Astronaut photograph ISS024-E-10403 was acquired on July 31, 2010, with a Nikon D2Xs digital camera using a 400 mm lens, and is provided by the ISS Crew Earth Observations experiment and Image Science & Analysis Laboratory, Johnson Space Center. The image was taken by the Expedition 24 crew. The image in this article has been cropped and enhanced to improve contrast. Lens artifacts have been removed. The International Space Station Program supports the laboratory as part of the ISS National Lab to help astronauts take pictures of Earth that will be of the greatest value to scientists and the public, and to make those images freely available on the Internet. Additional images taken by astronauts and cosmonauts can be viewed at the NASA/JSC Gateway to Astronaut Photography of Earth. Caption by William L. Stefanov, NASA-JSC.