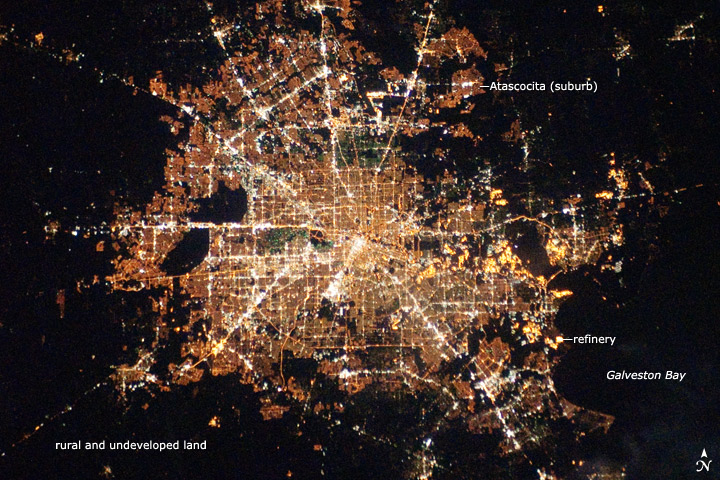 Houston, Texas, has been called the “energy capital of the world” due to its role as a major hub of the petroleum and other energy resource industries. The Houston metropolitan area covers almost 2,331,000 hectares (9,000 square miles) along the southeast Texas coastline, with an average elevation of 13 meters (43 feet) above sea level and a population of over 5 million (2006 US Census estimate).

The Houston metropolitan area is also noteworthy as being the largest in the United States without formal zoning restrictions on where and how people can build. This freedom has led to a highly diverse pattern of land use at the neighborhood scale; nevertheless, more general spatial patterns of land use can be recognized in remotely sensed data. These general patterns are particularly evident in nighttime photography of the urban area taken by astronauts on board the International Space Station.

The image depicts the roughly 100-kilometer (60-mile) east-west extent of the Houston metropolitan area. Houston proper is at image center, indicated by a “bull’s-eye” of elliptical white- to orange-lighted beltways and brightly lit white freeways radiating outwards from the central downtown area. Suburban and primarily residential urban areas are indicated by both reddish-brown and gray-green lighted regions, which indicate a higher proportion of tree cover and lower light density.

Petroleum refineries along the Houston Ship Channel are identified by densely lit areas of golden yellow light. Rural and undeveloped land rings the metropolitan area, and Galveston Bay to the southeast (image lower right) provides access to the Gulf of Mexico. Both types of non-urban surface appear dark in the image.

You can see more nighttime imagery of cities and learn about techniques that astronauts use to photograph them in the Earth Observatory feature Cities at Night.

Astronaut photograph ISS022-E-78463 was acquired on February 28, 2010, with a Nikon D3 digital camera and is provided by the ISS Crew Earth Observations experiment and Image Science & Analysis Laboratory, Johnson Space Center. The image was taken by the Expedition 22 crew. The image in this article has been cropped and enhanced to improve contrast. The International Space Station Program supports the laboratory as part of the ISS National Lab to help astronauts take pictures of Earth that will be of the greatest value to scientists and the public, and to make those images freely available on the Internet. Additional images taken by astronauts and cosmonauts can be viewed at the NASA/JSC Gateway to Astronaut Photography of Earth. Caption by William L. Stefanov, NASA-JSC.

Deep in the Heart of Texas