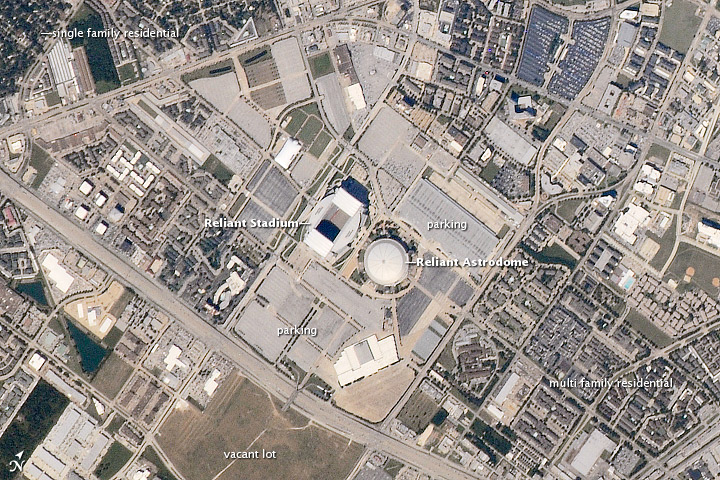 This astronaut photograph highlights the Reliant Park area of Houston’s â€œinner loop,â€ the part of the city located within Interstate Highway 610. Reliant Park includes two large sports complexes: Reliant Stadium and Reliant Astrodome. Built in 1965, the Astrodome was the world’s first fully enclosed, domed sports stadium. The structure is no longer used for major sporting events, and proposals have been made for renovating and repurposing it. Reliant Stadium was built in 2002 to host the Houston Texans, a National Football League team. It was the first American football stadium built with a retractable roof (shown here in its retracted position).

Houston is home to the NASA Johnson Space Center and is notable among major U.S. metropolitan areas for its lack of formal zoning ordinances. (Other forms of regulation play a similar role here.) This leads to highly mixed land use within the city. Around Reliant Park you can find large asphalt parking lots, vacant lots with a mixture of grass and exposed topsoil, and both single- and multi-family residential areas. A forested area (dark green, lower left) is located less than two kilometers from the parking lots.

This subset of a handheld digital camera image has a spatial resolution of 2 to 3 meters per pixel (or picture element), making it one of the highest spatial resolution images ever obtained from the International Space Station (ISS). Such high resolution was made possible by using lens â€œdoublersâ€ to increase the optical magnification of camera lenses. Active ISS motion compensation is also important; the astronaut must pan the camera by hand at just the right rate, keeping the object at the same point in the viewfinder. The technique involves bracing yourself against the space station bulkhead to prevent movement related to weightlessness. Traditional short lens photography is easier because it does not require motion compensation.

Astronaut photograph ISS025-E-8532 was acquired on October 5, 2010, with a Nikon D3X digital camera using an effective 1000 mm lens, and is provided by the ISS Crew Earth Observations experiment and Image Science & Analysis Laboratory, Johnson Space Center. The image was taken by the Expedition 25 crew. The image in this article has been cropped and enhanced to improve contrast. Lens artifacts have been removed. The International Space Station Program supports the laboratory as part of the ISS National Lab to help astronauts take pictures of Earth that will be of the greatest value to scientists and the public, and to make those images freely available on the Internet. Additional images taken by astronauts and cosmonauts can be viewed at the NASA/JSC Gateway to Astronaut Photography of Earth. Caption by William L. Stefanov and M. Justin Wilkinson, NASA-JSC.

A series of digital photographs of Houston illustrates the new detail being obtained for cities around the world by crewmembers on the International Space Station. This image, captured on 17 December 2000 centers on the downtown region and shows extensive detail of streets, parks and major buildings.