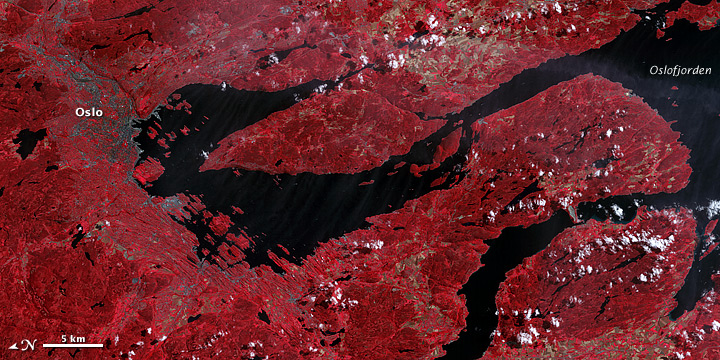 Fjords—long, skinny inlets where the sea has flooded glacial valleys—fringe the coastline of Norway. The country’s largest fjord, however, is not really a fjord but a rift valley running mostly north-south. Tectonic forces have slowly wrenched apart the planet’s crust in this region, leaving behind Oslofjorden, or Oslofjord. The sea has snaked its way up convoluted valley floor, terminating along the margin of Norway’s capital city of Oslo.

On August 26, 2000, the Advanced Spaceborne Thermal Emission and Reflection Radiometer (ASTER) on NASA’s Terra satellite captured this false-color image of Oslofjorden and the nearby city of Oslo. Vegetation is red, urbanized areas are blue-gray, water is navy, and clouds are white. This image has been rotated and north is to the lower left.

A 2008 study described the complex geologic history of Oslofjorden. Today’s landscape, the authors concluded, results from a prolonged period of faulting and volcanic activity that began during the Late Carboniferous Period, perhaps starting more than 300 million years ago. During the Late Carboniferous, sedimentary rocks—rocks eroded by wind and water and deposited as fine sediments—carpeted much of the region, which might have been partially flooded from time to time. Subsequent lava flows deposited volcanic rocks up to 20 meters (65 feet) thick in some places. As geologic forces pulled the crustal plate apart, new volcanoes formed in parts of the rift. A graben—area of low-lying land bordered by higher-elevation land—formed, bounded by geologic fault lines. The rift development slowly halted some 250 to 245 million years ago, around the beginning of the Mesozoic Era.