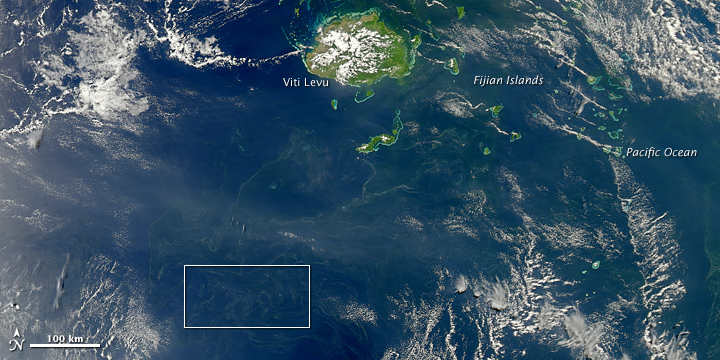 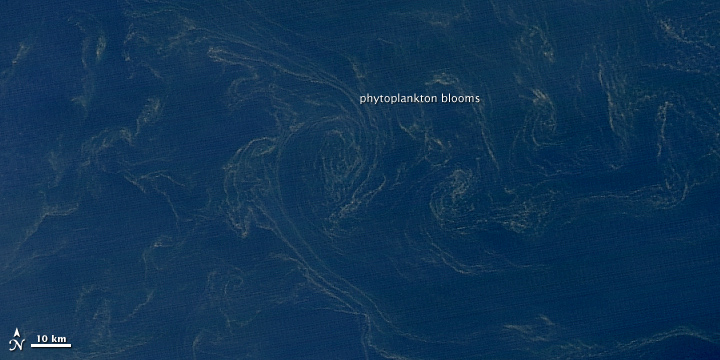 It’s hard to believe, but some of the smallest organisms on our planet can be viewed from space. Diminutive bacteria and plankton (microscopic, floating plants) can merge into great chains and mats that can be detected by satellites hundreds of miles up.

The Moderate Resolution Imaging Spectroradiometer (MODIS) on NASA’s Aqua satellite captured this image of a plankton or bacterial bloom south of Fiji on October 18, 2010. Though it is impossible to identify the species from space, it is likely that the yellow-green filaments are miles-long colonies of Trichodesmium, a form of cyanobacteria often found in tropical waters.

Trichodesmium tends to grow in warm, nutrient-poor waters that are well lit by the sun and otherwise devoid of most life. These cyanobacteria can make their own food, absorbing and using nitrogen from the open ocean and the air to fuel their growth. They “fix” nitrogen, just as certain plant legumes do on land. In the process, they effectively fertilize the ocean for the world’s primary producers, phytoplankton, which form the center of the ocean food web and provide more than half of the primary productivity on the planet.

Charles Darwin offered an early description of Trichodesmium, which sailors often call “sea sawdust,” during his voyage aboard HMS Beagle in 1845:

…My attention was called to a reddish-brown appearance in the sea. The whole surface of the water, as it appeared under a weak lens, seemed as if covered by chopped bits of hay, with their ends jagged. These are minute cylindrical confervae, in bundles or rafts of from twenty to sixty in each…Their numbers must be infinite: the ship passed through several bands of them, one of which was about ten yards wide, and, judging from the mud-like colour of the water, at least two and a half miles long. In almost every long voyage some account is given of these confervae. They appear especially common in the sea near Australia…Captain Cook, in his third voyage, remarks, that the sailors gave to this appearance the name of sea-sawdust.