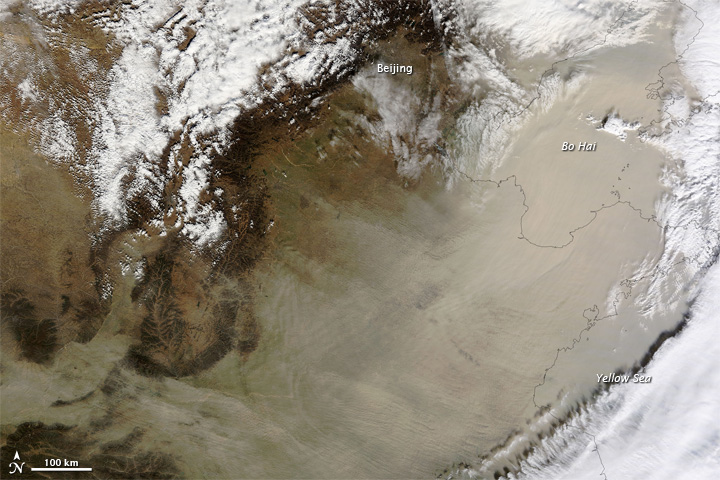 On November 11, 2010, a wall of sand blew across eastern China. The airborne sand entirely hides much of the North China Plain, Shandong Peninsula, and the Bo Hai from view in this true color image, taken mid-morning by the Moderate Resolution Imaging Spectroradiometer (MODIS) on NASA’s Terra satellite. Weather stations in several cities on the North China Plain reported blowing sand and poor visibility in the hours it took the storm to pass.

The fast-moving dust was blowing east from the Gobi Desert, where the massive storm originated the day before. After this image was taken, the dust moved towards the Korean Peninsula, where world leaders were gathering for the Group of 20 summit. A weather station in Seoul reported that the dust had reached Korea by 9:00 p.m. on November 11.

Such large dust storms are common in China, but the storms usually happen in the spring, when fronts from Siberia sweep southeast across the Gobi Desert. Late autumn and winter dust storms are rare.

On November 11, 2010, a wall of sand blew across eastern China hiding much of the North China Plain from view in this true color image.