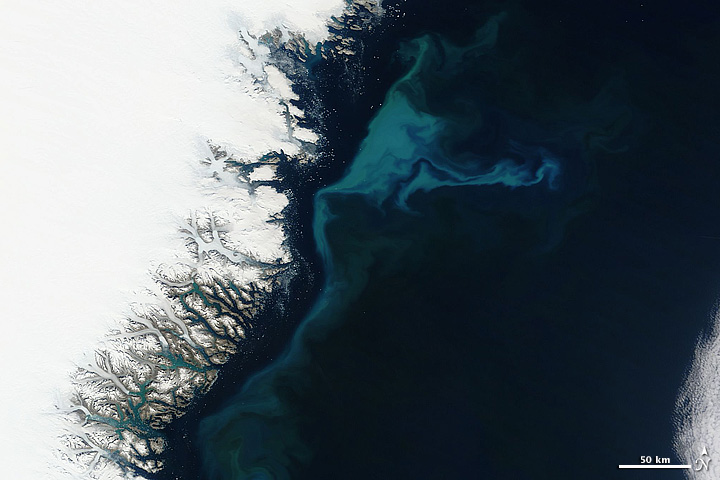 The stark black and white landscape of eastern Greenland provides a fine palette for the burst of color created by a large phytoplankton bloom in this photo-like image captured by the Moderate Resolution Imaging Spectroradiometer (MODIS) on NASA’s Terra satellite on August 7, 2010. The bloom blends shades of milky blue, turquoise, and green, created by different species of phytoplankton growing in the cold, nutrient-rich waters. Likely shaped by the East Greenland Current, the bloom extends along the southeast coast of Greenland. The full length of the bloom is visible in the large image, which shows a broader area.

The phytoplankton bloom is not the only source of color in the scene. The brilliant white of the ice sheet fades to gray in places along the shore where old ice is exposed. Tinted faintly brown like the craggy brown rocks that channel them, glaciers seep from the ice sheet into fjords, rivers of ice draining the great ice sheet. The glaciers give way to green-blue water, milky with the fine sediment created as the ice grinds over rock. These waters and the deep black-blue waters of the Atlantic Ocean are dotted with icebergs. No more than tiny white specks at this scale, the icebergs resemble tiny grains of salt floating on the water’s surface.

The large image is the most detailed version of the image, but the image is available in additional resolutions from the MODIS Rapid Response Team.

The stark black and white landscape of eastern Greenland provides a fine contrast to the burst of color created by a large phytoplankton bloom in this photo-like image from August 7, 2010.