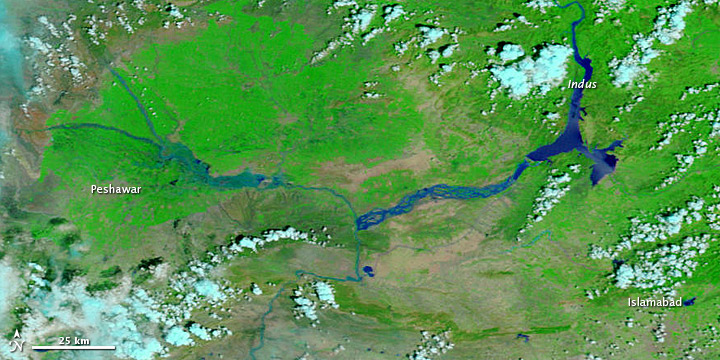 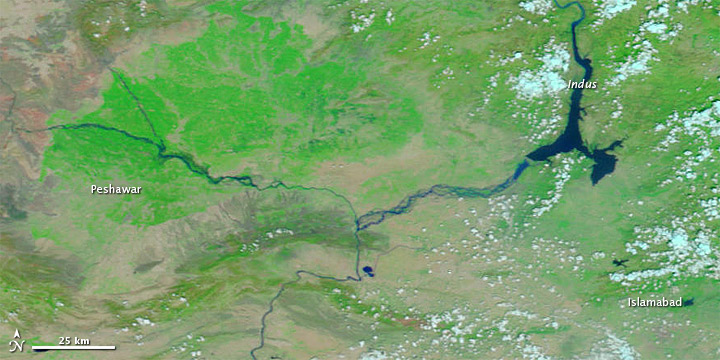 An estimated 4 million people were affected by Pakistan floods in early August 2010, Voice of America reported. Many had lost their homes, livestock, and crops. Road- and bridge-destroying floods had also left multiple areas cut off from the outside world as a combination of high waters and high temperatures raised the risk of waterborne disease.

The Moderate Resolution Imaging Spectroradiometer (MODIS) on NASA’s Terra satellite captured these images on August 4, 2010 (top), and August 3, 2009 (bottom). These images show the region between Islamabad and Peshawar. Both images use a combination of infrared and visible light to increase the contrast between water and land. Water varies in color from electric blue to navy. Vegetation is green and bare ground is pinkish brown. Clouds range in color from nearly white to pale blue-green.

Water levels are discernibly higher in August 2010. This is especially true north of Peshawar, where water has overtopped the banks of multiple waterways. Devastation in Peshawar included bridges damaged or washed away by floodwaters, and prefabricated bridges were being delivered to assist with rebuilding efforts, Agence France-Presse reported.

Acquired on September 1 and 13, 2012, these images compare conditions along the Indus River.