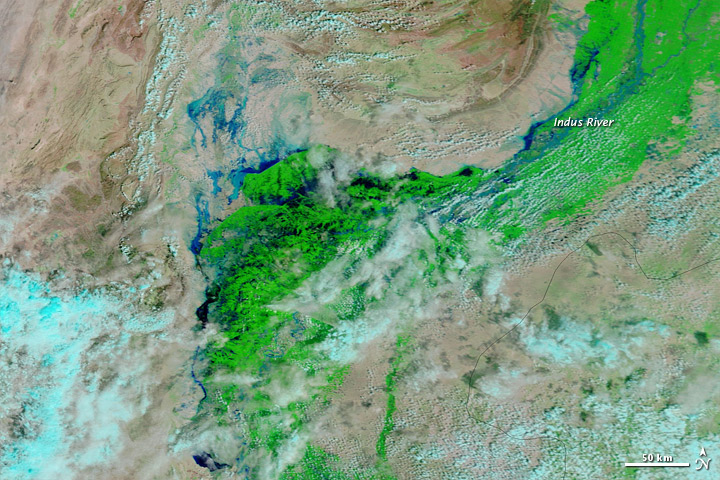 Torrential rains in September 2012 in Pakistan breached canals, inundated farms, villages, roads, and railways, and forced tens of thousands of people from their homes, according to news reports. Damage reports focused largely on the Punjab, Balochistan, and Sindh Provinces. More than 100 people were reported dead in Sindh Province alone, the Dawn Report said.

These images compare conditions along the Indus River where the borders of Punjab, Balochistan, and Sindh meet. In this region, a network of levees and canals distributes Pakistan’s normally scarce water resources. Acquired by the Moderate Resolution Imaging Spectroradiometer (MODIS) on NASA’s Terra satellite, the top image shows flooded conditions on September 13, 2012, and the bottom image shows more normal conditions on September 1, 2012.

Both of these images use a combination of visible and infrared light to increase contrast between water and land. Water varies in color from electric blue to navy, with darker shades generally indicating deeper water. Vegetation is bright green, and bare ground is pinkish beige. Clouds are pale blue-green and cast shadows onto the landscape below.

During the summer and fall of 2010, Pakistan experienced some of the worst flooding in living memory

Acquired on September 1 and 13, 2012, these images compare conditions along the Indus River.