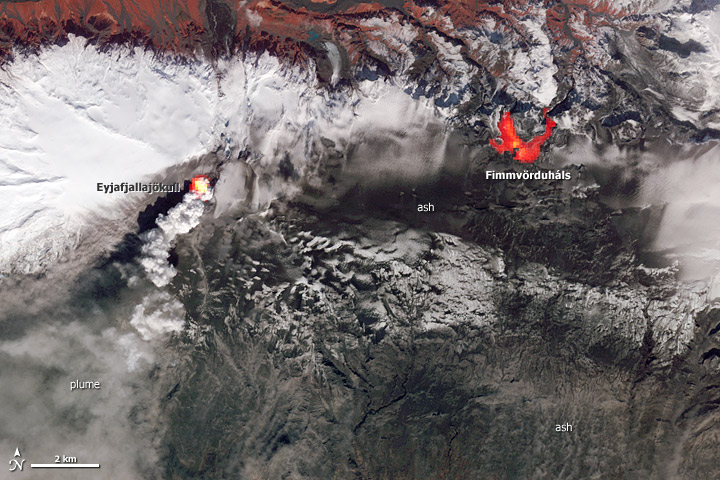 Although ash emissions had slowed by April 19, the eruption of Iceland’s Eyjafjallajökull Volcano continued. Early in the day, seismic tremors hinted that lava might have started flowing from the volcano, said the Icelandic Met Office. When the Icelandic Coast Guard flew over the volcano at 10:30, they observed magma being thrown 1.5–3 kilometers (1–2 miles) into the air, though no lava was flowing.

The Advanced Spaceborne Thermal Emission and Reflection Radiometer (ASTER) on NASA’s Terra satellite acquired this image at 1:50 p.m. local time on April 19. The image shows both the eruption plume and the heat signature of lava at the volcano’s summit and at nearby Fimmvörduháls, the site of a precursor eruption. The heat signature shows a rough estimate of temperature, with yellow being hottest and red coolest. The signature at Eyjafjallajökull is a concentrated circle without a river of lava, supporting the Icelandic Coast Guard’s observation that lava had not started to flow from the volcano.

ASTER observed the heat signature by recording thermal infrared radiation (energy) coming from the volcano. The rest of the image is made up of a combination of visible light and near-infrared light. The red that lines the top of the image is plant-covered land in the Markarfljót River valley. Blue streams of water flow from the Eyjafjallajökull ice cap to the river. Both north and due west of the Eyjafjallajökull Volcano, the ice is pristine, but to the east and south, dark ash covers the snow. The white plume rising from the volcano is likely a mixture of steam and ash.

NASA image by Rob Simmon made with data courtesy of the NASA/GSFC/MITI/ERSDAC/JAROS, and the U.S./Japan ASTER Science Team. Caption by Holli Riebeek and Rob Simmon.

A NASA satellite spied the eruption plume and the heat signature of lava at the summit.