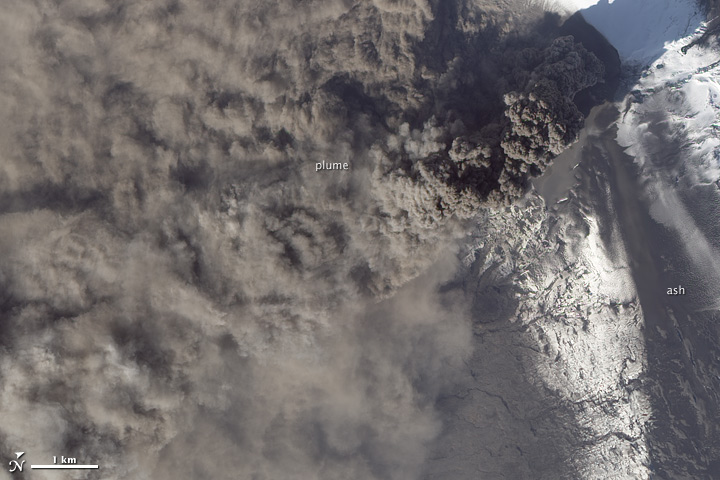 When Iceland’s Eyjafjallajökull Volcano began erupting on March 20, 2010, the first lava to erupt came from vents on the lower slopes of the volcano, which were snow-covered, but not under the mountain’s year-round ice cap. Lava flows filled gullies and built mounds of frothy rock, and they melted and vaporized the winter snow, creating relatively small steam plumes.

In mid-April, however, the character of the eruption changed dramatically, and this natural-color satellite image from April 17 provides a look at the new eruptive phase. A cloud of charcoal-brown ash covers half the image. A fresh plume of ash rises over the summit, its southern face illuminated by sunlight and its northern face deeply shadowed. The ash column casts a tall shadow onto the snow-covered ground to the north. West of the plume, the ground is nearly covered by ash.

This explosive phase of eruption began on April 14, according to a summary from the Nordic Volcanological Center. Unlike the initital activity, these eruptions occurred at vents that opened under the ice at the summit caldera. As the heat from the magma melts the ice, pulsing floods have escaped from beneath the ice cap, carrying rocks and mud.

The explosive eruptions at Eyjafjallajökull Volcano since April 14 may be both plinian, the word geologists use to describe eruptions of large columns of gas and ash, and phreatic, which describes explosive eruptions of steam that occur when magma comes into contact with water. As of April 19, the ash plumes were reported to be getting smaller, but they were still creating havoc with air travel in Europe.