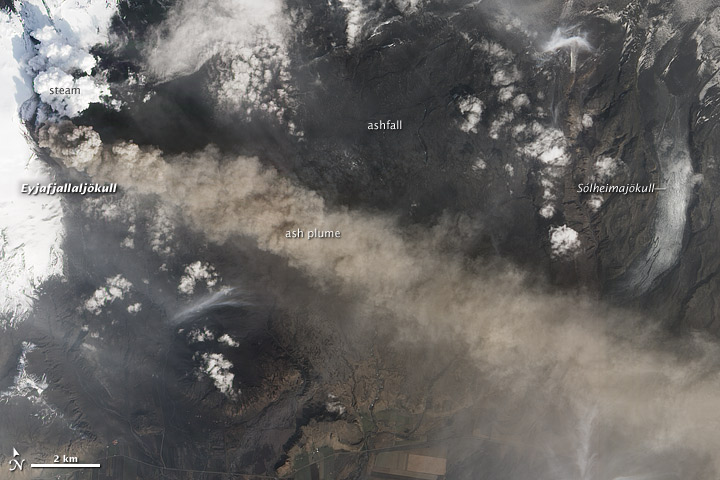 Ash and steam continued billowing from Eyjafjallajökull Volcano in early May 2010. The Advanced Land Imager (ALI) on NASA’s Earth Observing-1 (EO-1) satellite captured this natural-color image on May 2, 2010.

The volcano’s summit is near the left edge of this image, capped by a dark plume. The plume is dull gray-brown, indicating that its principal visible component is volcanic ash. Ash from the plume blows toward the east-southeast, passing over a charcoal-colored ash field on the land surface. Just to the north of Eyjafjallajökull’s summit are white puffs of steam, likely from surface lava flows vaporizing snow and glacial ice.

On May 4, 2010, the Icelandic Meteorological Office warned that Eyjafjallajökull showed no signs of ending its eruptive activity in the near future. The Met Office reported that ash from the volcano had reached a height of 5.8 to 6.0 kilometers (19,000 to 20,000 feet) above sea level, and had spread 65 to 80 kilometers (40 to 50 miles) east-southeast of the volcano, where it impeded visibility for local residents. The Met Office also reported that lava continued flowing down a steep hill north of the crater.