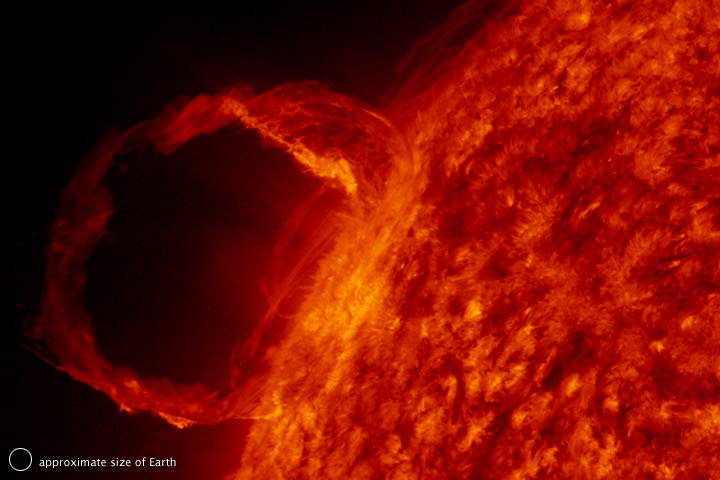 On April 21, 2010, NASA released the first-light images from its newest sun-monitoring mission, the Solar Dynamics Observatory. The mission’s high-speed, IMAX-quality photography will improve predictions of solar activity that can disrupt everything from GPS satellites to high-voltage power lines.

This image was captured by the new observatory’s Atmospheric Imaging Assembly on March 30, 2010. The sensor views the lower atmosphere of the Sun in ultraviolet wavelengths, and it captured this view as a massive plume of dense, cool (only compared to the rest of the solar atmosphere) plasma erupted on the Sun’s surface. The plasma flows in a loop along a magnetic field line.

When these ribbons of plasma appear against the black backdrop of space, as in this image, they appear bright, and they are called solar prominences. Compared to the size and mass of the Sun, the prominence seems insubstantial. But a small white circle at the lower left corner of the image dispels the misperception: ten Earths could be stacked in a line between the Sun and the top of the loop.

The movie shows the prominence erupting. The same sequence of images is replayed several times, with a final “zoom out” to show the whole disk of the Sun. At the start of the movie, an arc of plasma arises close to the surface and balloons outward into space. Near the end of the expansion phase, the ring of plasma breaks open, and some of the plasma appears to escape the pull of the magnetic field loop. (When significant amounts of plasma escape the Sun, the event is called a coronal mass ejection.) At the end of the sequence of images, the two halves of the split prominence appear to be sucked back into deeper layers of the Sun like water pulled down a drain.

The new data from the Solar Dynamics Observatory won’t just help scientists trying to predict solar “weather,” like flares and coronal mass ejections, it should also help them better understand solar “climate,” including what causes the solar cycle to vary in length and intensity—and at times, to apparently stop altogether. Better understanding of what causes the variability in the Sun’s energy output will help scientists make better predictions about how much of a role the Sun will play in future climate change.