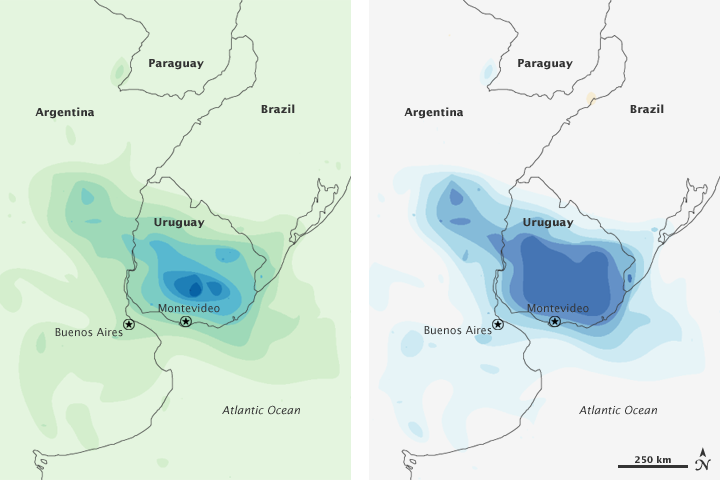 Intense thunderstorms inundated parts of Uruguay and Argentina in early February 2010. According to news reports, flooding in Uruguay was severe enough to force the evacuation of more than 5,000 residents as floodwaters overwhelmed homes and roads, and cut off electricity and plumbing services.

These two images show rainfall from February 1–7, 2010. The image on the left shows total rainfall, ranging from less than 100 millimeters (3.9 inches) to more than 900 millimeters (35 inches). The image on the right shows the rainfall anomaly: this year’s total compared to the average for this time of year from 1998 to 2009. Anomalies shown in this image range from 60 millimeters (2.4 inches) above and below the average. In both images, deepest blue corresponds with heaviest rain. The most intense rainfall appears just north of Montevideo, Uruguay (left image). Above-average rainfall occurs throughout almost all of Uruguay (right image). Above-average rain also extends across the border into Argentina.

The drenching thunderstorms were linked to another extreme event: a heat wave. The heat wave struck the South American mid-continent in early February 2010, sending temperatures in Porto Alegre, Brazil, up to 37 degrees Celsius (99 degrees Fahrenheit). Apparent temperatures—how hot it feels given the humidity and wind—were even higher: 44 degrees Celsius (110 degrees Fahrenheit). Along the southern margin of the heat wave, the tropical air collided with cooler air. Thunderstorms often occur along the boundary—the weather front—where two air masses with different temperatures and/or humidities collide. The hot, humid air responsible for the heat wave farther north helped make the thunderstorms especially intense.

Covering the period from February 1 to February 7, 2010, these images show total rainfall (left image) and rainfall anomalies (right image) for the region around Buenos Aires and Uruguay. Deepest blue corresponds to heaviest rain in each image.