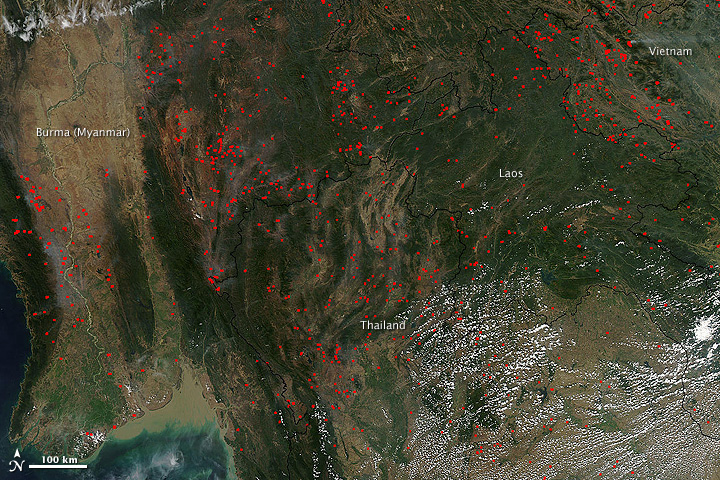 The climate of Southeast Asia is dominated by the Asian monsoon. From late spring through summer, it is rainy and hot; from fall through winter, it is cooler and dry. In the late dry season, fires—both intentional and accidental—become widespread as people turn to fire to clear and manage agricultural and residential landscapes.

In the first months of the year, it is not uncommon for satellites to capture sights such as the one shown in this image: hundreds of active fires burning across the hills and valleys of Burma (Myanmar), Thailand, Laos, and Vietnam. (Fires are also present in southern China and Cambodia, which are visible in the large version of the image.)

This photo-like image was captured by the Moderate Resolution Imaging Spectroradiometer (MODIS) on NASA’s Aqua satellite on February 10, 2010. MODIS detects fires not from visible smoke plumes, but from thermal infrared energy radiating from the surface. The heat energy is invisible in images like this, but the locations where MODIS detected fires are labeled with red dots.

In permanently cultivated (usually lowland) areas, fires are used to burn crop residues and get the land ready for the upcoming growing season. In urban and residential areas, people burn leaves, trash, and brush. In the mountains, fires may indicate permanent conversion of forest to agricultural land, or they may be associated with shifting cultivation, also known as swidden farming. In this system, patches of forest are cyclically felled, burned, cultivated, and then fallowed for a time. Secondary forest or other vegetation reclaims the clearing during the fallow period.