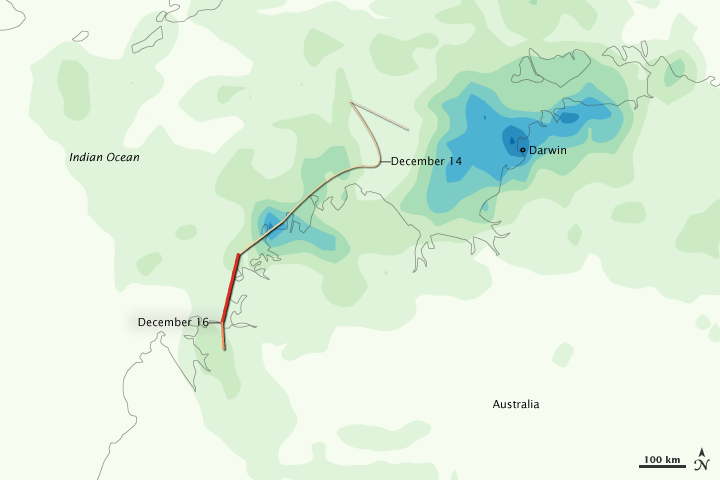 Laurence was Australia’s first tropical cyclone of the season in December 2009, and the storm reached Category 4 strength before weakening over land. Besides hurricane-force winds, Laurence brought heavy rain to parts of Australia’s northwestern coast.

This color-coded image shows rainfall and storm intensity for Tropical Cyclone Laurence from December 10–17, 2009. Rainfall amounts appear in shades of green and blue, with pale green indicating the lightest amounts, and deep blue indicating the heaviest amounts—over 600 millimeters (23.6 inches). Laurence’s track is marked by a line that varies in color from pale peach to red, with deeper shades showing greater storm intensity.

Rainbands—rings of thunderstorms—typically surround a hurricane’s eye, and the heavy rains caused by a hurricane can cause more damage than high winds. This image shows highest rainfall amounts near Darwin, but the cyclone’s greatest intensity occurred hundreds of kilometers to the southwest. A large area of moderate rain spans most of the image.

At 11:55 p.m. Western Australia time on December 17, 2009, the Australian Bureau of Meteorology reported that Laurence was roughly 50 nautical miles (90 kilometers) east of Derby, and was projected to be the same distance southeast of the city about 12 hours later. The U.S. Navy’s Joint Typhoon Warning Center reported that Laurence was dissipating over land, but still packed sustained winds of 65 knots (120 kilometers per hour) and gusts up to 80 knots (150 kilometers per hour).