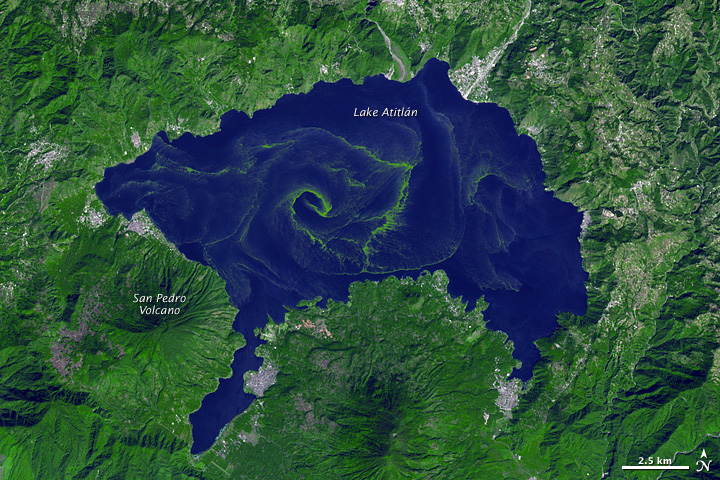 Normally a picturesque blue lake surrounded by steep volcanoes and Mayan settlements, Guatemala’s Lake Atitlán acquired a film of green scum in October and November 2009. A large bloom of cyanobacteria, more commonly known as blue-green algae, spread across the lake in green filaments and strands that are clearly visible in this simulated-natural-color image from November 22, 2009. The Advanced Spaceborne Thermal Emission and Reflection Radiometer (ASTER) on NASA’s Terra satellite acquired the image.

Cyanobacteria are single-celled organisms that rely on photosynthesis to turn sunlight into food. The bacteria grow swiftly when nutrients like phosphorus and nitrogen concentrate in still water. According to local news reports, the nutrients feeding the bloom in Lake Atitlán come from sewage, agricultural run off, and increased run off as a result of deforestation around the lake basin.

The image reveals clearly why run-off would end up in the lake. Mountains and volcanoes encircle Lake Atitlán, ensuring that all rain that falls in the basin flows into the bowl-like lake. Silver-gray settlements, another source of pollution, ring the lake. Deforestation is a little bit more difficult to see. The forest is a darker shade of green than agricultural fields. The contrast between forested land and agriculture is most evident on the slopes of the San Pedro Volcano on the southwest shore of the lake. Large pale green squares cut into the dark green crown over the peak of the volcano.

Cyanobacteria are a serious problem both because they are toxic to humans and other animals and because they create dead zones. As the bacteria multiply, they form a thick mat that blocks sunlight. Dense blooms can also consume all of the oxygen in the water, leaving a dead zone where other plants and animals cannot survive. The density of the bloom also affects the cyanobacteria. Since only the top layer of the bloom receives life-sustaining light, the bacteria in the rest of the bloom die and decay, releasing toxins into the water. These highly toxic harmful algal blooms cause illness in people and other animals.

The government of Guatemala estimates that it will cost at least 32 million dollars to clean up the lake, install water treatment plants, and implement other measures to limit the flow of pollution into the lake to prevent future outbreaks, reported the Guatemala Times.