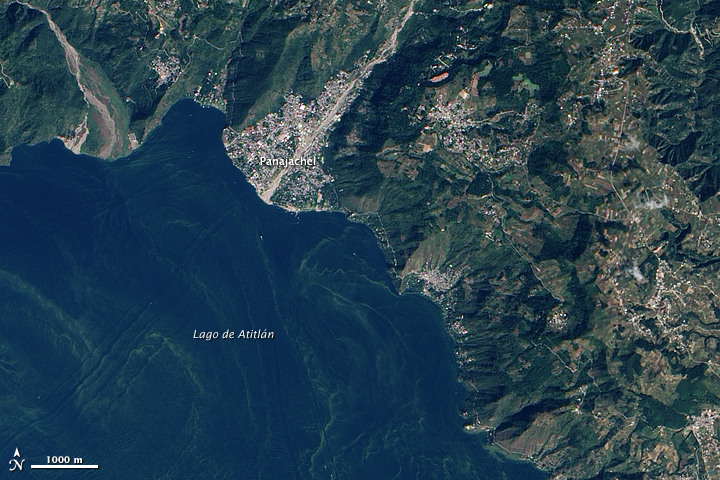 Harmful blue-green algae rose to the surface of Guatemala’s Lake Atitlán in October and November 2009. The green scum swirls across the surface of the lake in filaments in this photo-like image taken by NASA’s EO-1 satellite on November 27. The straight dark lines that cut through the bloom are probably the wakes of boats leaving or traveling to the city of Panajachel. A few boats are visible as tiny white dots on the surface of the lake.

Blue-green algae, or cyanobacteria, are single-celled organisms that rely on photosynthesis to turn sunlight into food. The bacteria grow swiftly when nutrients like phosphorus and nitrogen concentrate in still water. According to local news reports, the nutrients feeding the bloom in Lake Atitlán come from sewage, agricultural run off, and increased run off as a result of deforestation around the lake basin.

Cyanobacteria are toxic to humans and other animals. Large blooms can also rob the water of oxygen, creating a dead zone where other organisms cannot survive. This image illustrates the difficultly of removing the bloom. The image shows a small part of the lake, perhaps a quarter of the lake at most. If each dark, straight line through the green scum is from a single boat, it would clearly take many boats deliberating removing the scum to have much of an impact. The long-term solution is to limit or eliminate the run-off and sewage that enters the lake so future blooms can’t develop.