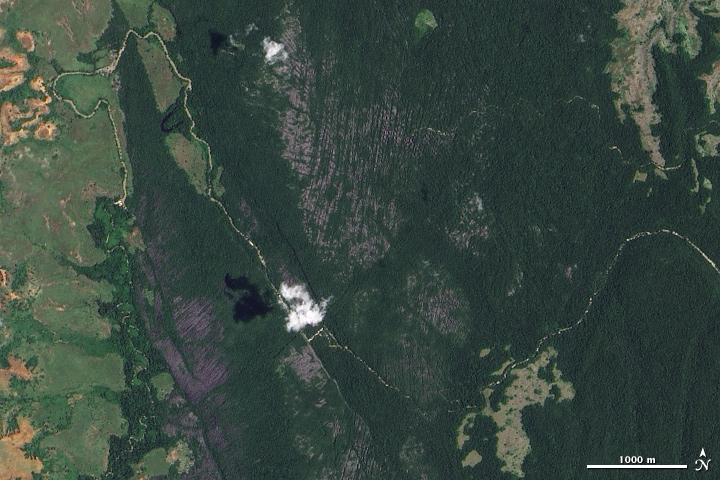 In western Madagascar, on the Bemaraha Plateau not far from the coast, lie a national park and nature preserve. Both areas are named for their otherworldly, rocky spires: tsingy. A haphazard landing on these razor-sharp rocks guarantees injury; the inhospitable terrain long provided local wildlife with protection against human encroachment.

The Advanced Land Imager (ALI) on NASA’s Earth Observing-1 (EO-1) satellite captured this true-color image of a portion of Madagascar’s Tsingy de Bemaraha National Park on January 16, 2005. Although less dramatic from the sky than from the ground, the rock formations are still visible in this image, especially near the top center. Together, naked rocks and vegetation produce a patchwork of green and gray. The outcrops appear to form long lines that run roughly north to south, but this is due partly to the angle of sunlight. Just as the clouds cast their shadows to the west, the rocks cast their longest shadows in that direction, too. In reality, breaks along multiple directions dissect the spires of rock, forming a crosshatch pattern.

The formation of these unusual rocks actually began some 200 million years ago when layers of calcite accumulated at the bottom of a Jurassic lagoon, forming a thick limestone bed. Later tectonic activity elevated the limestone, and as sea level fell during the Pleistocene ice ages, even more of the limestone was exposed. No longer underwater, the ancient sediments were carved by monsoon rains, which washed softer rocks away and left tougher rocks standing. Meanwhile, groundwater carved caves below the surface. As cave ceilings gave way, canyons formed between rocky towers. Today, the limestone formation shows a combination of jagged spires and rounded surfaces.

To a human, the area is formidable, but negotiating the tsingy is far easier for a primate that evolved here, the sifaka lemur, which jumps nimbly between spires. Because of its value in preserving habitat for lemurs and birds, the Tsingy de Bemaraha Strict Nature Reserve has been established as a World Heritage site of the United Nations Educational, Scientific and Cultural Organization (UNESCO).

Acquired January 16, 2005, this true-color image shows part of the inhospitable limestone landscape of western Madagascar, with bare rocks and vegetation forming a patchwork of gray and green.