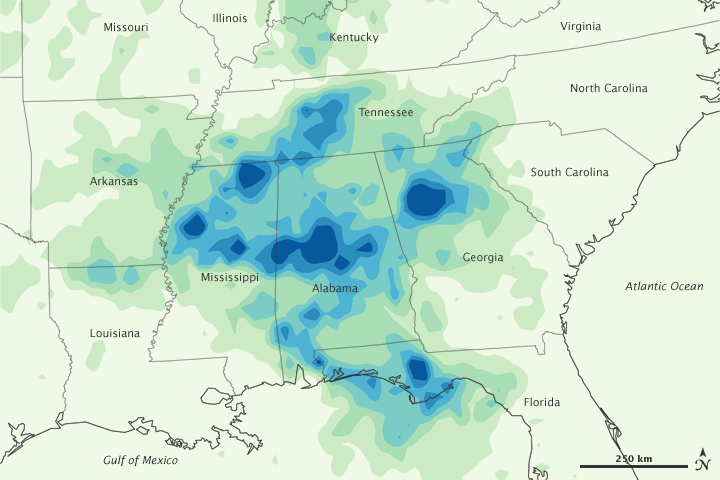 Several storms over the southeastern United States left behind acres of standing water and multiple deaths in September 2009. The governor of Georgia declared a state of emergency in the state’s 17 counties hardest hit by the floods, CNN reported. Deaths in Georgia alone totaled 7 by the morning of September 22, 2009, according to the Atlanta Journal Constitution.

This image shows estimates of rainfall for the southeastern United States from September 14–21. The estimates, acquired by multiple satellites, are calibrated with rainfall measurements from the Tropical Rainfall Measuring Mission (TRMM) satellite in the Multi-satellite Precipitation Analysis. The highest rainfall amounts—more than 300 millimeters (11.8 inches)—appear in blue. The lightest amounts appear in pale green. Rainfall occurred throughout Arkansas, Tennessee, Mississippi, Alabama, and Georgia. Especially intense rainfall occurred in Mississippi, Alabama, Georgia, and northern Florida.

An area of low pressure over the lower Mississippi River Valley drew moisture up from the Gulf of Mexico northeastward over the American Southeast, fueling showers and thunderstorms. The low-pressure area persisted over the same location for several days, allowing rainfall totals to accumulate.