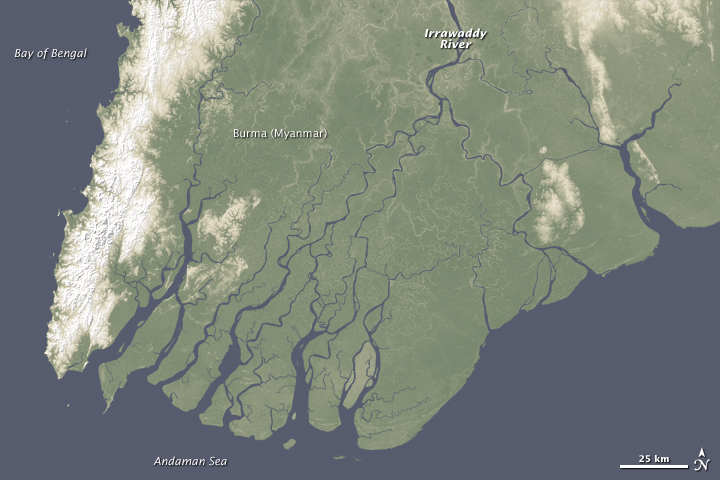 Rivers flow across the world’s continents, picking up soil as they grow and move towards the ocean. When rivers pour into the sea, the dirt and rocks sink as fresh water disperses into salt. Over time, rich flat land, a delta, builds around the river mouth, usually forming a triangular shape. Deltas are rich agricultural land and provide easy access to water and water-based transportation. As a result, many of the world’s largest deltas are heavily populated. Nearly half a billion people live on or near deltas, and that could be an increasingly serious problem, says James Syvitski, a researcher at the University of Colorado, and his collaborators.

In a paper published in Nature Geoscience on September 20, 2009, Syvitski and his colleagues warn that deltas throughout the world are sinking, largely because of human activity. One of the deltas in danger is the Irrawaddy River delta in Burma (Myanmar), shown in this image. The image is an elevation map, made from data collected by the Shuttle Radar Topography Mission. Higher elevations are white, while lower elevations are depicted in green. The Irrawaddy Delta is clearly flat, much of it below five meters in elevation. This low elevation makes the delta particularly prone to flooding from storm surges. In April 2008, Cyclone Nargis flooded much of the delta, killing thousands. As deltas sink, storm surges can move farther inland, affecting more people.

Syvitski and his colleagues used shuttle radar topography data compared to historic maps to assess the condition of 33 of the world’s largest deltas. They found that many of the deltas were sinking, and as a result, the delta area vulnerable to flooding could increase by 50 percent in the twenty-first century. Disastrous storm surge flooding like that seen in the wake of Cyclone Nargis or Hurricane Katrina could become more common.

The deltas are sinking for a number of reasons. Deltas grow when they receive new sediment, often during seasonal floods. Rivers split into many channels that wander across the delta, distributing sediment. In this image, small dark green channels reveal where the Irrawaddy once meandered across its delta before finding its current path, which is marked in blue. Higher-elevation white squiggles are probably the canopy of trees growing along small water channels. But wandering rivers are very inconvenient for people, who build canals to divert the water and prevent flooding in cities built on the delta. People also build dams along major rivers to control flooding and generate power. The sediment in the river water gets trapped behind the dams. In the end, less sediment reaches the deltas, so they are not regenerated. Even during severe floods, the authors found that little sediment was being added to many of the deltas.

Even as the deltas are not being replenished with fresh soil, sediment in the delta is compacted or erodes away, naturally causing the delta to sink. The delta may sink farther if oil, gas, or water are pumped out of the delta. If the delta sinks faster than it gets new soil, it becomes increasingly prone to floods, both from the river itself and from storm surges. Even if the delta is building, it must build faster than sea levels are rising, or it will, in effect, sink.