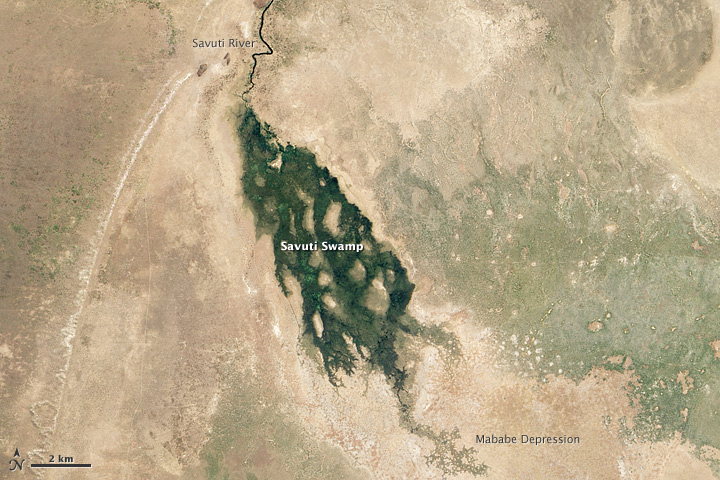 The Okavango Delta is an oasis in Africa’s Kalahari Desert. When the Kalahari reaches its driest phase—when plants wither and animals hunt for drinking water—the Okavango provides it. But starting in 2009, the delta provided more than usual, and excess water overflowed into other land depressions in the region.

One of the waterways linked to the Okavango Delta is the Savuti River, roughly 80 kilometers (50 miles) northeast of the sprawling inland delta. On May 26, 2012, the Advanced Land Imager (ALI) on NASA’s Earth Observing-1 (EO-1) satellite captured this natural-color image of water flowing through the Savuti River and into Savuti Swamp. The swamp sits inside the larger Mababe Depression within Botswana’s Chobe National Park.

Unlike the seasonal flooding that affects the Okavango Delta every year, the flooding in 2012 was unusual. Guido van Langenhove of Hydrological Services Namibia characterized it as “an exceptional hyrological event.”

The rains that fill the Okavango don’t actually fall over the delta itself. Instead, the rains fall in the Angolan Highlands and travel about 450 kilometers (280 miles) through meandering rivers and over an extremely shallow gradient. As a result, rains that typically fall over Angola from October through March don’t usually reach the bottom of the Okavango Delta until July. But in May 2012, water had already arrived in the Okavango and was overflowing into other waterways such as the Savuti River.

“The Okavango Delta has had record floods for a few years now,” said Frank Eckardt of the University of Cape Town. “We have seen the Boteti River in flood since 2009, and have also seen water in Lake Xau, southeast of the delta. Now we are seeing water in the Selinda Channel, heading into the Mababe Depression northeast of the delta. Some of these depressions only fill with water after decades of dryness.”

Van Langenhove concurs, remarking that the flooding had reactivated waterways in the region regarded by some observers as “fossil rivers.”