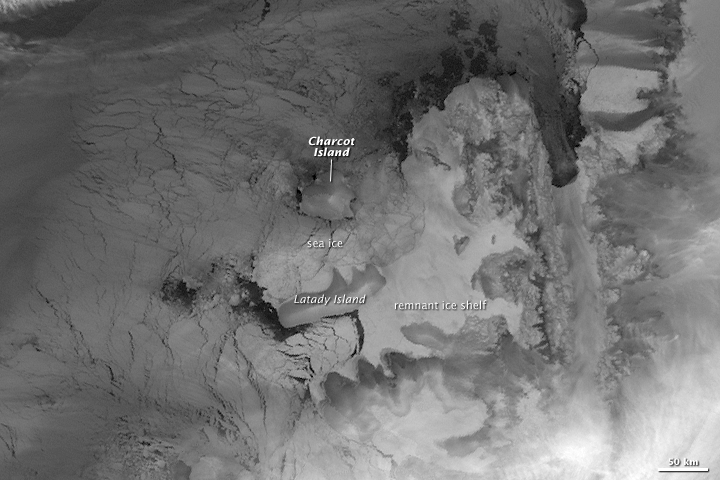 The Wilkins Ice Shelf on the western side of the Antarctic Peninsula used to connect to two small islands off the Antarctic coast, Latady and Charcot. In 1998, the northern edge of the shelf (east of Charcot Island) retreated, but the ice fragments remained in place for a decade. Starting in late February 2008, the western edge of the shelf (south of Charcot Island) began to retreat. Between August and November 2008, new cracks appeared along the shelf’s northern edge, leaving just a spindly ice bridge to Charcot Island that broke in early April 2009. Despite the ice bridge’s rupture, sea ice lingered around Charcot Island during the Southern Hemisphere’s autumn in 2009. But during the winter of 2009, it became possible to circumnavigate the island that had long been connected to Antarctica by an ice shelf.

This image is made from thermal infrared data collected by the Moderate Resolution Imaging Spectroradiometer (MODIS) on NASA’s Terra satellite on August 2, 2009. (A photo-like image isn’t possible at this latitude in the winter because of polar darkness). This grayscale image shows relative differences in surface temperature. Dark gray indicates relatively warm temperatures and white indicates relatively cold temperatures. Remnant ice shelf east of Latady Island appears white, as does some of the sea ice between Charcot and Latady Islands. Charcot Island’s nearly black perimeter indicates an area of relatively open ocean that could be navigated by ship. In addition, an area of relatively warm ocean water appears off the western end of Latady Island.