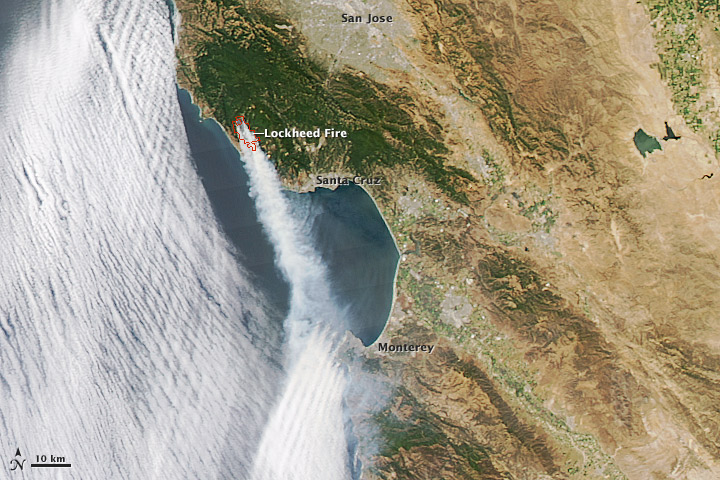 On August 12, 2009, the Lockheed Fire broke out in the mountains southwest of San Jose, California, and burned through an estimated 2,600 acres of brush and timber by the morning of August 14. The fire was burning about 4 miles northwest of the town of Boulder Creek, and at least 2,000 people had been forced to evacuate their homes.

This photo-like image of the fire was captured by the Moderate Resolution Imaging Spectroradiometer (MODIS) on NASA’s Aqua satellite on August 13. The red outlines mark the location where the sensor detected active fire. A narrow but dense plume of smoke slices across the mouth of Monterey Bay, stretching past the city of Santa Cruz toward Monterey.

The landscape of this part of California is one of redwoods and fir trees, and it appears lushly green in this image. But mixed with these forests are tracts of chaparral (landscapes dominated by fire-adapted, drought-tolerant shrubs and grasses) and large stands of highly flammable knobcone pine. Hot, fast-moving fires are a natural part of this landscape, and people’s desire to suppress forest fires around their homes in recent decades has allowed some areas to become unnaturally overgrown—and primed for wildfire.

A narrow but dense plume of smoke rises from the Lockheed Fire southwest of San Jose, California, and slices across the mouth of Monterey Bay, stretching past the city of Santa Cruz toward Monterey in this photo-like image taken on August 13, 2009.