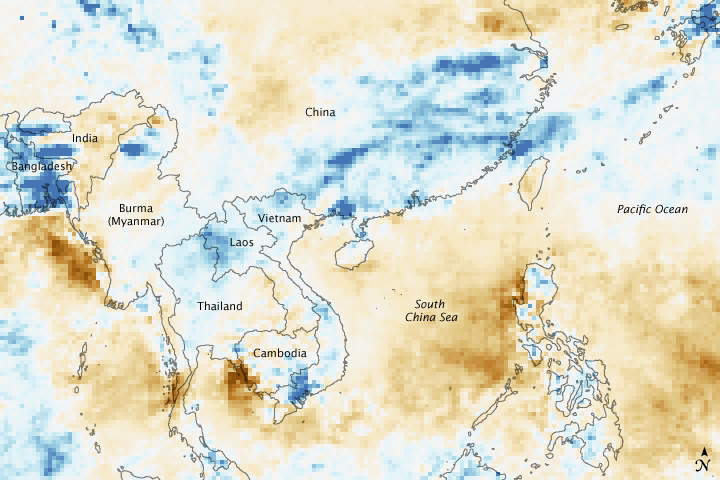 Floods swept across southern China and northern Vietnam in the wake of several days of extreme rain in early July 2009. This image, based on data collected by the Tropical Rainfall Measuring Mission (TRMM) satellite, shows rainfall anomalies for the week of June 29 through July 5, 2009. Blue indicates regions where rainfall was much heavier than average, while brown indicates that less rain fell than average. A broad swath of blue covers southern China and northern Vietnam, revealing patterns of heavy rain during the week.

Although southern China and Vietnam are prone to flooding during the annual summer rainy season, the first week of July 2009 brought unusually heavy rain. The rains caused widespread flooding and landslides that left 75 people dead and 938,000 homeless in China as of July 5, reported China’s Xinhua news. In Vietnam, at least 22 people died, said the AFP news service. More rain was forecast in both countries.

The TRMM satellite was launched in 1997 to study rainfall in the tropics. Data from the satellite are also used to calibrate rainfall estimates from other satellites as part of a multisatellite precipitation analysis, a near-real-time rainfall estimate produced by scientists at NASA’s Goddard Space Flight Center. This image was made with data from the multisatellite precipitation analysis compared to average rainfall seen during the same period between 1998 and 2008. TRMM is a joint mission between NASA and the Japanese Aerospace Exploration Agency, JAXA.