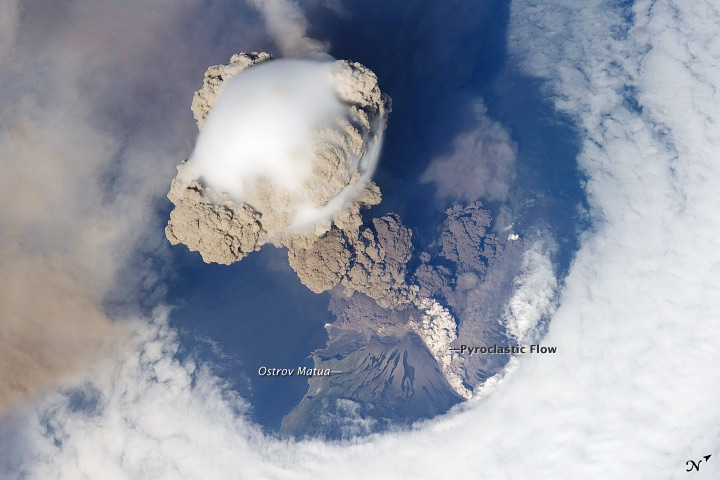 A fortuitous orbit of the International Space Station allowed the astronauts this striking view of Sarychev Volcano (Kuril Islands, northeast of Japan) in an early stage of eruption on June 12, 2009. Sarychev Peak is one of the most active volcanoes in the Kuril Island chain, and it is located on the northwestern end of Matua Island. Prior to June 12, the last explosive eruption occurred in 1989, with eruptions in 1986, 1976, 1954, and 1946 also producing lava flows. Ash from the multi-day eruption has been detected 2,407 kilometers east-southeast and 926 kilometers west-northwest of the volcano, and commercial airline flights are being diverted away from the region to minimize the danger of engine failures from ash intake.

This detailed astronaut photograph is exciting to volcanologists because it captures several phenomena that occur during the earliest stages of an explosive volcanic eruption. The main column is one of a series of plumes that rose above Matua Island on June 12. The plume appears to be a combination of brown ash and white steam. The vigorously rising plume gives the steam a bubble-like appearance.**

In contrast, the smooth white cloud on top may be water condensation that resulted from rapid rising and cooling of the air mass above the ash column. This cloud, which meteorologists call a pileus cloud, is probably a transient feature: the eruption plume is starting to punch through. The structure also indicates that little to no shearing wind was present at the time to disrupt the plume. (Satellite images acquired 2-3 days after the start of activity illustrate the effect of shearing winds on the spread of the ash plumes across the Pacific Ocean.)

By contrast, a cloud of denser, gray ash—probably a pyroclastic flow—appears to be hugging the ground, descending from the volcano summit. The rising eruption plume casts a shadow to the northwest of the island (image top). Brown ash at a lower altitude of the atmosphere spreads out above the ground at image lower left. Low-level stratus clouds approach Matua Island from the east, wrapping around the lower slopes of the volcano. Only about 1.5 kilometers of the coastline of Matua Island (image lower center) are visible beneath the clouds and ash.

**Editor’s note: Following the publication of this photograph, the atmospheric and volcanic features it captured generated debate among meteorologists, geoscientists, and volcanologists who viewed it. Post-publication, scientists have proposed—and disagreed about—three possible explanations for the hole in the cloud deck above the volcano.

One explanation is that the hole in the clouds has nothing to do with the eruption at all. In places where islands are surrounded by oceans with cool surface temperatures, it is common for a sheet of clouds to form and drift with the low-level winds. When the cloud layer encounters an island, the moist air closer to the surface is forced upward. Because the air above the marine layer is dry, the clouds evaporate, leaving a hole in the cloud deck. These openings, or wakes, in the clouds can extend far downwind of the island, sometimes wrapping into swirling eddies called von Karman vortices.

The other two possibilities that scientists have offered appeared in the original caption. One is that the shockwave from the eruption shoved up the overlying atmosphere and disturbed the cloud deck, either making a hole or widening an existing opening. The final possibility is that as the plume rises, air flows down around the sides like water flowing off the back of a surfacing dolphin. As air sinks, it tends to warm; clouds in the air evaporate.

Astronaut photograph ISS020-E-9048 was acquired on June 12, 2009, with a Nikon D2XS digital camera fitted with a 400 mm lens, and is provided by the ISS Crew Earth Observations experiment and Image Science & Analysis Laboratory, Johnson Space Center. The image was taken by the Expedition 20 crew. The image in this article has been cropped and enhanced to improve contrast. Lens artifacts have been removed. The International Space Station Program supports the laboratory to help astronauts take pictures of Earth that will be of the greatest value to scientists and the public, and to make those images freely available on the Internet. Additional images taken by astronauts and cosmonauts can be viewed at the NASA/JSC Gateway to Astronaut Photography of Earth. Caption by M. Justin Wilkinson, NASA-JSC.

A fortuitous orbit of the International Space Station in 2009 offered the astronauts a striking view of the volcano in an early stage of eruption.