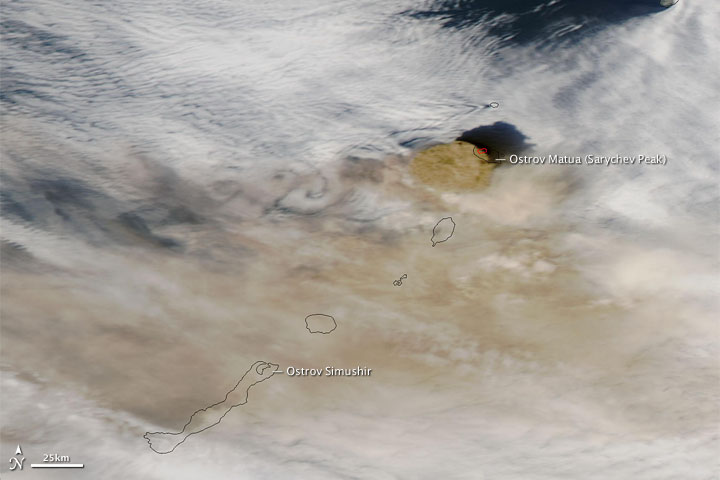 When the Moderate Resolution Imaging Spectroradiometer (MODIS) on NASA’s Aqua satellite passed overhead at 2:10 p.m. local time (2:10 a.m. UTC), the volcano had apparently produced a high-altitude ash plume. In this photo-like image, the brown ash plume forms a circular, opaque cloud immediately southwest of Ostrov Matua, casting a large shadow to the north. Farther away from the summit, thinner ash plumes mingle with clouds. Clouds and ash swirl in von Karman vortices west of the volcanic island. The red outline along the ash cloud’s edge indicates a hotspot of high surface temperature resulting from volcanic activity.

Part of the Pacific Ring of Fire of heightened seismic and volcanic activity, Sarychev Peak sits at the northwestern end of Ostrov Matua (Matua Island) in the Central Kuril (Kurile) Islands. Sarychev Peak is a stratovolcano composed of layers of ash, lava, and volcanic rocks. Eruptions have been recorded at Sarychev Peak since the eighteenth century, and have ranged in intensity from relatively calm lava flows to explosive eruptions.