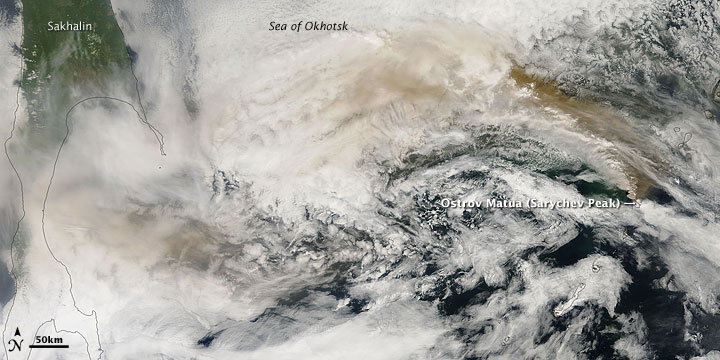 Volcanic ash plumes from Sarychev Peak blew across the Sea of Okhotsk and over the island of Sakhalin on June 16, 2009. The Moderate Resolution Imaging Spectroradiometer (MODIS) on NASA’s Terra satellite captured this photo-like image the same day, at 12:50 p.m. local time (12:50 a.m. UTC). Brown volcanic ash blows in a counterclockwise arc across a bank of clouds hovering over the ocean. Ash has thinned considerably over Sakhalin, but the ash is still discernible both east and west of the island’s shores.

According to the Volcanism Blog, Sarychev Peak began a fresh burst of activity at 5:30 a.m. local time on June 16 (5:30 p.m. UTC on June 15). Roughly 12 hours later, the volcano apparently began continuous ash emissions. Sending ash to a height of 10 to 13 kilometers (6 to 8 miles), the eruption disrupted air traffic in the region.

Sarychev Peak sits at the northwestern end of Ostrov Matua (Matua Island) in the Central Kuril (Kurile) Islands off Russia’s Kamchatka Peninsula. Rising to a height of 1,496 meters (4,908 feet), the volcano is one of the Kuril Islands’s most active.