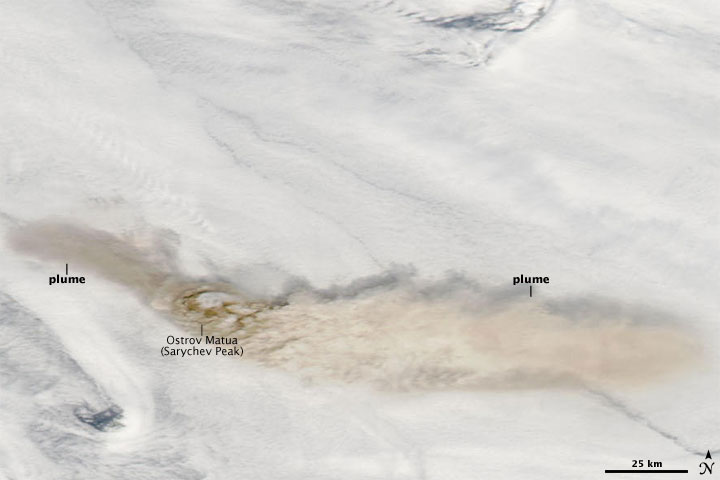 The Moderate Resolution Imaging Spectroradiometer (MODIS) on NASA’s Aqua satellite captured the top image on June 12, 2009. A thick blanket of clouds covers the region, but not the gray-brown ash plumes. The larger plume toward the east-southeast casts shadows onto the cloud cover below. The darkest shades of brown appear near the volcano’s summit, an indication of high ash concentrations. The relatively light color of the volcanic plume east of the volcano suggests high water vapor content.

MODIS on NASA’s Terra satellite captured the bottom image, a near-cloudless view of the same region, on May 11, 2009.

At the northwestern end of Ostrov Matua (Matua Island), Sarychev Peak ranks among the most active volcanoes in the Kuril (or Kurile) Islands. The volcano is a stratovolcano composed of alternating layers of solidified ash, hardened lava, and rocks thrown out by earlier eruptions. Eruptions have been recorded at Sarychev Peak since the eighteenth century, and have ranged in intensity from relatively calm lava flows to explosive eruptions.