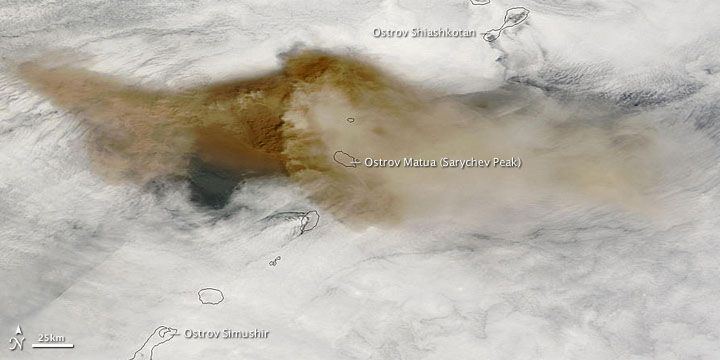 Black outlines indicate the location of some of the Kuril Islands. The deep brown color of the volcanic plume suggests high concentrations of volcanic ash, particularly west of Sarychev’s summit. Unlike the soft, fluffy material that results from burned vegetation, volcanic ash consists of tiny, hard, jagged particles that pose hazards to people, wildlife, and even machinery.

Part of the Pacific Ring of Fire, Sarychev Peak occupies the northwestern end of Ostrov Matua (Matua Island) in the Central Kuril (Kurile) Islands. Sarychev is a stratovolcano—a steep-sloped structure composed of layers of layers of ash, lava, and volcanic rocks left over from earlier eruptions.

On June 18, 2009, Sarychev Peak produced a plume that was barely visible amid the cloud cover over the Sea of Okhotsk.