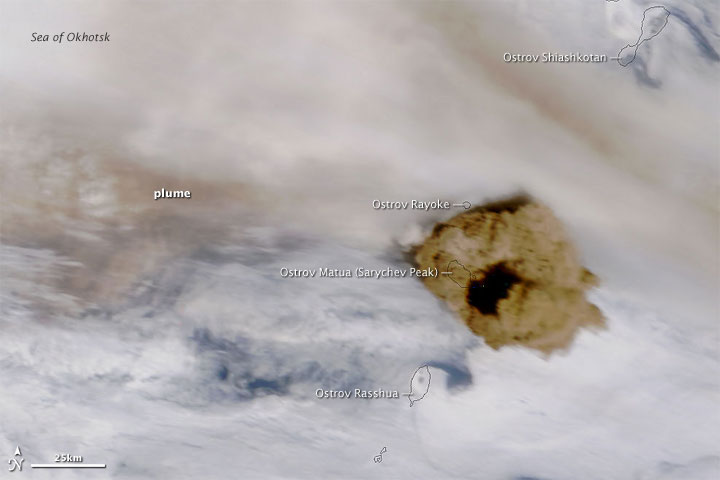 The Moderate Resolution Imaging Spectroradiometer (MODIS) on NASA’s Terra satellite captured this photo-like image on June 15, 2009, three days after the volcano began erupting. Clouds and/or volcanic ash obscure most of the sea surface and islands, but black outlines delineate Ostrov Matua (the island home of Sarychev Peak) and neighboring islands.

Evidence of recent eruptions appears in the form of a faint brown haze northeast and west of Ostrov Matua. MODIS apparently also caught a fresh burst of activity in this shot. A brown mass of volcanic ash, over 50 kilometers (30 miles) in diameter, hovers over the island. Judging from the plume’s shadows, it may have occurred in two or more pulses; toward the southeast, a small portion of the plume casts its shadow on the wider mass below.

Sarychev Peak is a stratovolcano composed of alternating layers of volcanic ash, lava, and rocks from earlier eruptions. It reaches an altitude of 1,496 meters (4,908 feet) above sea level along the summit’s southeastern rim. Historical volcanic activity has ranged from lava effusion to explosive eruptions.

On June 18, 2009, Sarychev Peak produced a plume that was barely visible amid the cloud cover over the Sea of Okhotsk.