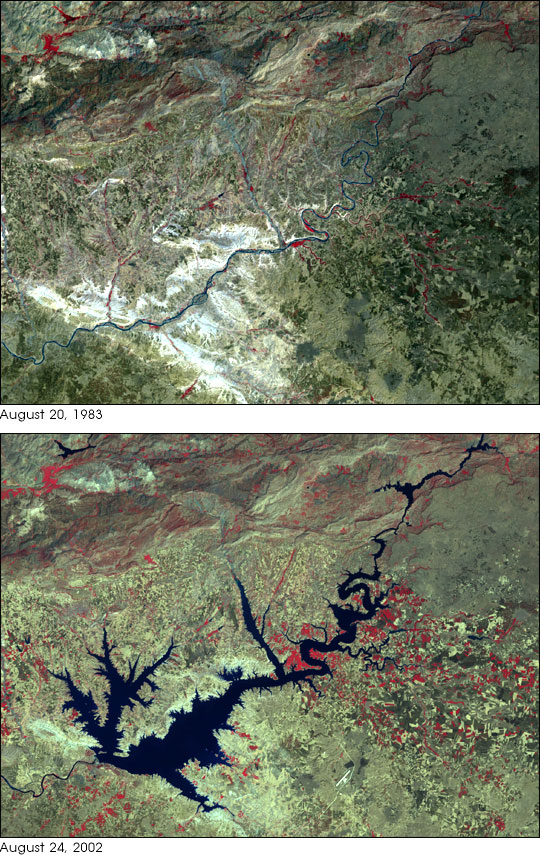 Turkey’s Ataturk Dam was completed in 1990. It is the largest of a series of dams along the two major rivers of the region, the Tigris and Euphrates, which both have their headwaters in southeastern Turkey. Built both to generate electricity for the region and to irrigate the plains between the Euphrates (on which it sits) and the Tigris (to the east), Ataturk Dam is the centerpiece of a huge public works program within Turkey known as the Southeastern Anatolia Project. When the entire program of reservoirs, power generation stations, and irrigation channels is constructed, it will irrigate some 1.7 million hectares (4.2 million acres). The reservoir already provides 8.9 billion kilowatt hours of electricity, roughly 22 percent of Turkey’s anticipated electrical needs in 2010, when the project is expected to be completed. With the dam now finished, as well as the first of the irrigation channels, crops such as cotton are being grown in the Harran Plains in the dry season, where previous irrigation was limited to borewater and much less land was in active production.

In this pair of Landsat images, the dramatic growth of the Ataturk Dam Lake in the space of 19 years is quite apparent. The newly formed lake, sometimes referred to as a sea by locals, covers some 817 square kilometer (320 square miles) in total surface area.

These images were acquired by the Landsat 4 Multispectral Sensor (MSS) and the Landsat 7 Enhanced Thematic Mapper Plus (ETM+) instruments. The first image was acquired by MSS on August 20, 1983, and the second by ETM+ on August 24, 2002. Both false-color composite images were constructed by combining near-infrared, red, and green wavelengths (MSS bands 3, 2, and 1; ETM+ bands 4, 3, and 2).