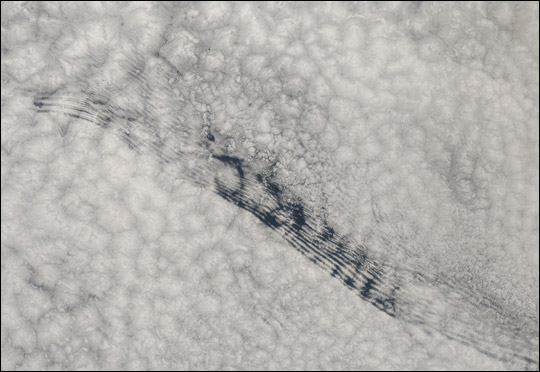 Here’s a nice image to show your professor in Cloud Appreciation 101 class. This true-color scene shows a deck of marine stratus clouds over the South Atlantic Ocean somewhere off the west coast of Angola, Africa. Stratus are low, relatively flat clouds, up to 1,980 m (6,500 feet) in altitude, that generally spread out to form a layer over a large region. Stratus cloud layers often form along coastlines.

Notice the grooved pattern running from upper left (northwest) to lower right (southeast) through the marine stratus clouds in this scene. It is unusual to see such sharp boundaries in clouds, particularly when they extend in such a regular pattern for such a long distance. So far, consensus is the patterns cannot be due to gravity waves, as the scene is not over land, nor are they due to an air mass advecting horizontally through the cloud deck. So the question remains: What made this pattern?

This image was acquired by the Moderate Resolution Imaging Spectroradiometer (MODIS), aboard NASA’s Aqua satellite, on August 28, 2003. The high-resolution image provided above is 500 meters per pixel. The MODIS Rapid Response System provides this image at MODIS’ maximum spatial resolution of 250 meters.