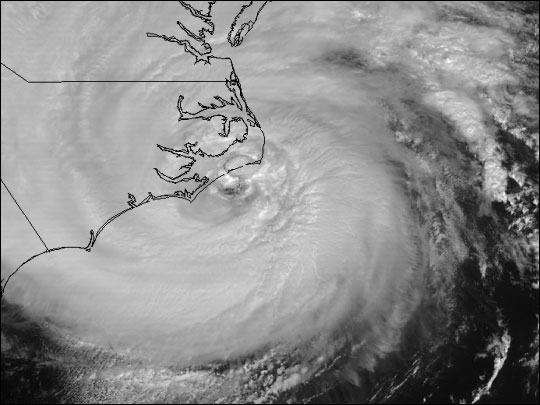 Although she had subsided from a Category 5 to a Category 2 storm, Hurricane Isabel still packed considerable punch as she came ashore between Cape Lookout and Cape Hatteras on North Carolina’s Outer Banks on September 18, 2003. Isabel grew to a massive size just before she hit land, with hurricane-force winds radiating as far as 185 km (115 miles) from the eye, and tropical storm-force winds extending roughly 555 km (345 miles) outward from the eye.

The still image above, and the accompanying time series, was acquired by the GOES satellite at 2:02 PM EDT, September 18, 2003. The movie begins as Hurricane Isabel was approaching Cape Lookout on the morning of September 18. As the eye of the storm moved inland, Isabel veered to the north and weakened into a tropical storm, losing much of its structure. The storm charged up the western side of the Chesapeake Bay and continued on its northward surge until it eventually fell apart over Ohio.

With its relatively high winds and heavy rains, Isabel pounded heavily populated areas in North Carolina, Virginia, Washington, D.C., Maryland, and Delaware, claiming at least 35 lives and leaving millions without power. Due to the widespread damage caused by the storm, President Bush declared major disaster areas in each of those states.

Animations by Robert Simmon, based on data provided by the GOES Project Science Office