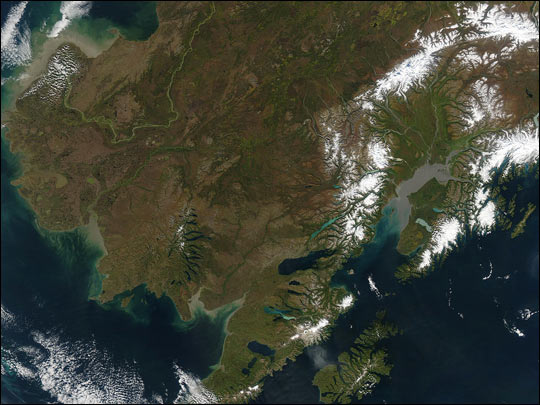 A rare clear view of the state of Alaska reveals a beauty that is as spectacular from space as it is on the ground. On September 14, 2003, the clouds parted over the region, and showed the landscape already displaying fall color, although the official start of the season was a week away. The state is swathed in reddish browns, golds, and greens as summer’s lushness fades. Scattered across the landscape are several dark brown patches that mark the location of fire-scarred terrain.

In the upper left corner of the scene, the Yukon River flows down from the north as a bright green ribbon, emptying sediment and other organic matter into Norton Sound. Right of center, Cook Inlet is colored gray by fine glacial silt brought in by the Susitna River and its tributaries. Snow-covered mountain ranges, including the Alaska Range to the north, surround the Inlet. At bottom, to the right of center, is Kodiak Island.

This image was captured by the Moderate Resolution Imaging Spectroradiometer (MODIS) on the Aqua satellite. The large image provided above shows a wider area in better detail; the scene extends all the way north to the Brooks Range and Alaksa’s Northern Slope and southward along several hundred kilometers of the Alaska Peninsula.

The high-resolution image provided above is 500 meters per pixel. The MODIS Rapid Response System provides this image in even higher detail at MODIS’ maximum spatial resolution of 250 meters.

On July 16, 2007, lightning ignited a fire on Alaska’s North Slope. Since then, the landscape changed from summer green to autumn brown, but the fire was still burning on September 25. Over the roughly two-month period, the fire burned about 222,500 acres.

The colors of Alaska are those of a landscape captured between summer and fall. The northern slopes of the Brooks Range Mountains and the Arctic Coastal Plain are not yet dusted with snow, but the vegetation has the burnished look of autumn. The gray, bare rock of the mountain is exposed at high altitudes, while valleys and lower slopes are lined with green.