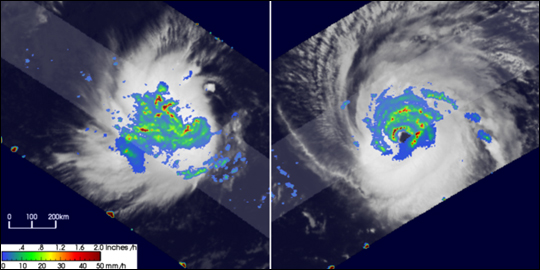 Hurricane Isabel is now the second major hurricane of the 2003 Atlantic season. Like Hurricane Fabian before it, Isabel originated in the eastern Atlantic from an easterly wave coming off of the coast of Africa and is known as a "Cape Verde" storm. Cape Verde storms are more prominant in the middle part of the hurricane season as sea surface temperatures become more favorable for development in that part of the Atlantic.

The Tropical Rainfall Measuring Mission (TRMM) satellite is a valuable tool for examining hurricanes especially when they are far out to sea where observations are limited. TRMM captured these two images of Isabel as it tracked across the central Atlantic.

The first image was taken at 07:18 UTC (03:18 am AST) on 6 September 2003 just as Isabel was getting organized into a tropical storm. At the time, the system was located 600 miles west of the Cape Verde Islands and within hours would be named a tropical storm by the National Hurricane Center with winds estimated at 40 mph. The image provides a top down view of the storm with rainfall rates from the TRMM Precipitation Radar (PR) in the inner swath and the TRMM Microwave Imager (TMI) in the outer swath overlaid on TRMM Visible Infrared Scanner (VIRS) data (white areas). It shows that the rainfall pattern is very asymmetrical and that the system does not yet have a closed eye. However, the VIRS data shows that conditions are favorable for further development. That is, the storm has good outflow as evidenced by the cirrus outflow especially on the northern, western and southern sides of the storm.

The second image taken just a couple of days later on 8 September at 21:56 UTC (5:56 pm AST) shows Isabel had strengthened into a major hurricane. It is now very well organized with a well-defined eye and good banding evident in the rainfield (green areas). The PR shows that there is heavy rainfall all along the western and northern eye wall (red and green areas) providing the heat energy that fuels the storm. The VIRS data also shows excellent outflow to all quadrants meaning conditions continue to be favorable for further strengthening. At this time, Isabel was a Category 3 hurricane with winds estimated at 125 mph and was located 1200 miles east of the Leeward Islands. Isabel would later become a Category 4 storm with winds estimated at 135 mph by the National Hurricane Center.

Astronaut Ed Lu snapped this photo of the eye of Hurricane Isabel from the International Space Station on September 13, 2003 at 11:18 UTC. At the time, Isabel was located about 450 miles northeast of Puerto Rico. It had dropped to a Category 4 hurricane on the Saffir-Simpson Hurricane Scale, packing winds of 150 miles per hour with gusts up to 184 miles per hour. This photo reveals the structure of Isabel’s eyewall.