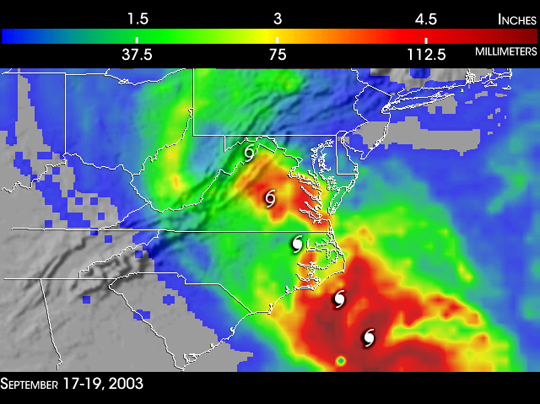 Isabel, which was once a powerful Category 5 hurricane in the central Atlantic with winds estimated at 160 mph, finally came ashore on September 18, 2003, as a much weaker Category 2 storm. When it made landfall just south of Cape Hatteras along the Outer Banks of North Carolina, Isabel’s winds neared 100 miles per hour. Isabel quickly tracked off to the northwest leaving heavy rains, downed trees and widespread power outages thoughout the mid-Atlantic region.

The TRMM-based, near-real time Multi-satellite Precipitation Analysis (MPA) at the NASA Goddard Space Flight Center shows rainfall totals along Isabel’s path between September 17 and September 19, 2003. The heaviest rains (darker reds), on the order of 6 inches, appear offshore. Inland, the highest totals occur over central and southeast Virginia with widespread areas receiving 4 to 5 inches of rain (red areas). Most of central and eastern North Carolina received between 1.5 and 3 inches of rain(green areas) with locally heavier amounts in areas of the Outer Banks (red areas). Rainfall totals in western North Carolina, the Delmarva peninsula and eastern Maryland were relatively light (blue areas).

In general, the MPA estimates agree well with radar observations with the exception of far northern North Carolina near the border with Virginia, where radar estimates tend to be somewhat higher. Overall the rainfall totals from Isabel were relatively low due to the rapid forward motion of the storm. Isabel moved quickly to the northwest after coming ashore at between 18 and 24 mph around the backside of a high pressure system to the east and ahead of an approaching trough from the west.

The hurricane and tropical storm symbols mark the positions of Isabel every 6 hours beginning at 5 am EDT on September 18 as reported by the National Hurricane Center.