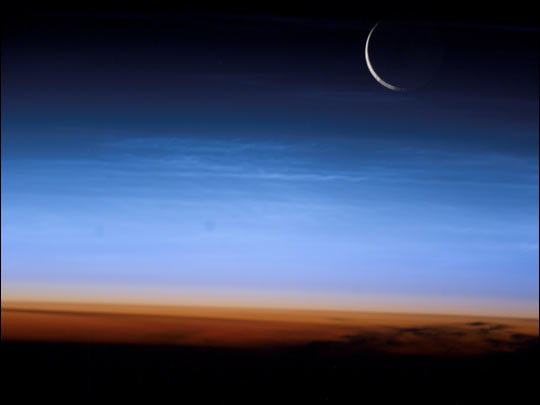 The sliver of the setting moon and clouds that shine at night—noctilucent clouds—caught the eye of astronaut Ed Lu aboard the International Space Station (ISS) last week.

Noctilucent clouds are very high clouds that look like cirrus clouds, but are much higher (75-90 km above the Earth’s surface) than clouds that we observe every day. They are optically thin and can only be observed during twilight hours, when the sun is just below the horizon and only shines on the uppermost atmosphere. In this image, the limb of the Earth at the bottom transitions into the orange-colored troposphere, the lowest and most dense portion of the Earth’s atmosphere. The troposphere ends abruptly at the tropopause, which appears in the image as the sharp boundary between the orange- and blue- colored atmosphere. The silvery-blue noctilucent clouds are far above this boundary.

This image was taken July 27, 2003 when the ISS was over central Asia. June and July is the season for noctilucent clouds in the northern hemisphere—they form in the polar mesosphere, generally above 50 degrees latitude. Recent studies address why noctilucent clouds exist, whether the frequency of occurrence has increased throughout the 20th century (some researchers believe they have), and whether their frequency reflects human activities. Astronauts and cosmonauts have observed them over northern latitudes (Europe, Russia) in the past, but this summer’s display has been remarkable.

Astronaut photograph ISS007-E-10974 was taken with a Kodak DCS760 digital camera equipped with a 400mm lens and provided by the Earth Observations Laboratory, Johnson Space Center. The International Space Station Program supports the laboratory to help astronauts take pictures of Earth that will be of the greatest value to scientists and the public, and to make those images freely available on the Internet. Additional images taken by astronauts and cosmonauts can be viewed at the NASA/JSC Gateway to Astronaut Photography of Earth.