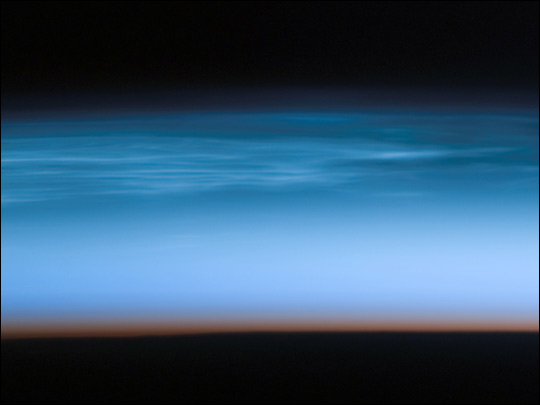 In the summertime in the far northern or southern latitudes, high in the Earth’s atmosphere at the edge of space, thin, silvery clouds sometimes become visible just after sunset. These high clouds, occurring at altitudes of about 80 kilometers (50 miles), are called polar mesospheric clouds (PMCs). They are also called noctilucent (“night-shining”) clouds. In recent years, polar mesospheric clouds seem to be occurring more frequently and at lower latitudes than they have in the past, and studies are underway to determine whether their occurrence is related to global climate change.

In June 2007, the Space Shuttle crew visiting the International Space Station (ISS) observed spectacular polar mesospheric clouds over north-central Asia. This image was taken looking north while the Shuttle and ISS were docking and flying over the border between western China, Mongolia, and Kazakhstan. The red-to-dark region at the bottom of the image is the dense part of the Earth’s atmosphere. Because this image was taken with a long lens (180mm), the entire profile of the Earth’s limb (the edge of the atmosphere) was not captured.

Featured astronaut photograph STS117-E-6998 was acquired by the STS-117 crew on June 10, 2007, with a Kodak 760C digital camera using an 180 mm lens, and is provided by the ISS Crew Earth Observations experiment and Image Science & Analysis Laboratory at Johnson Space Center. The image in this article has been enhanced to improve contrast. The International Space Station Program supports the laboratory to help astronauts take pictures of Earth that will be of the greatest value to scientists and the public, and to make those images freely available on the Internet. Additional images taken by astronauts and cosmonauts can be viewed at the NASA/JSC Gateway to Astronaut Photography of Earth.