Flooding Along the Indus River 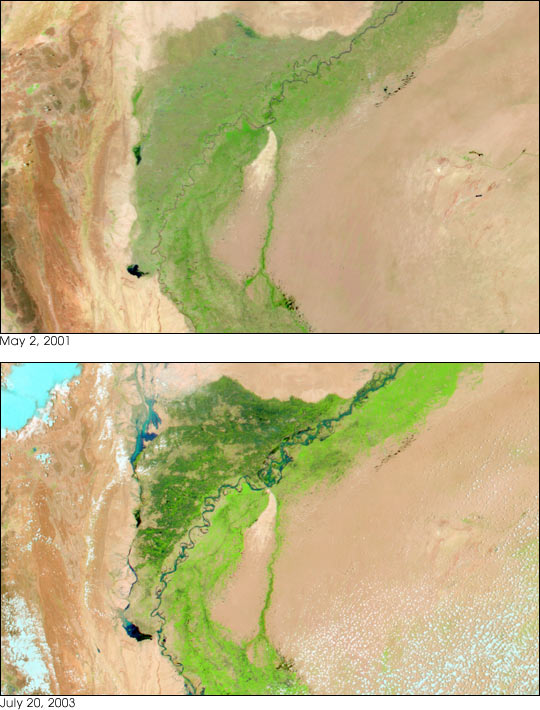 Monsoon rains arrived in Pakistan in early July 2003 and many localities in the southeastern part of the country have been experiencing torrential rains off and on ever since. The excessive input of water has caused the Indus River to overrun its banks in a number of places just north of Hyderabad. According to news reports, more than 400 villages in this district have been washed away by the flood waters. At least 167 lives have been claimed, while an estimated 300,000 people have lost their homes. Officials are concerned that the standing water is contributing to an increase in the number of malaria cases in the region.

The false-color images above show a stretch of the Indus River, in the southeast of Pakistan north of Hyderabad. The top image shows the region on May 2, 2003, before the onset of the monsoon rains. The bottom image shows the same region on July 20, 2003, during a break in the clouds during the monsoon season. Both images were acquired by the Moderate Resolution Imaging Spectroradiometer (MODIS), flying aboard NASA’s Aqua satellite. Notice the relatively swollen size of the Indus River (the dark blue ribbon meandering from top to bottom through the center of the scene), and the large pockets of standing water around many of the river’s bends. Vegetated land appears green in this image, while bare land surface is light brown. Clouds are light blue.