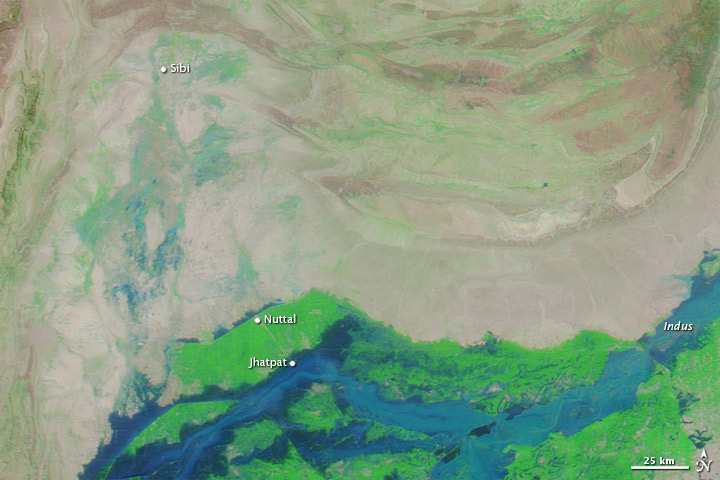 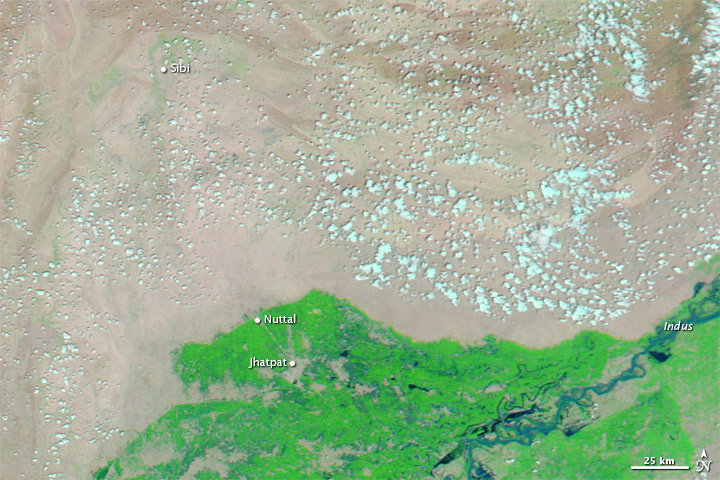 In central and southern Pakistan, the Indus River flows through the provinces of Punjab and Sindh, barely missing Balochistan Province in the country’s southwest. Although the Indus River misses Balochistan, floodwaters from the 2010 summer monsoon season did not. In early September 2010, a United Nations representative described the flooding in Balochistan as the worst he had seen, and expressed concern that the region might be neglected as attention focused on areas closer to the Indus River.

These images from the Moderate Resolution Imaging Spectroradiometer (MODIS) on NASA’s Aqua satellite show an area immediately northwest of the large bend in the Indus River where it flows from Punjab into Sindh Province. Jhatpat, Nuttal, Sibi, and most of the land area shown in this image lie in Balochistan Province. The top image shows the area on August 28, 2010, and the bottom image shows the same area exactly one year earlier.

Both images use a combination of infrared and visible light to increase the contrast between water and land. Water ranges in color from electric blue to navy. Vegetation appears bright green. Bare land varies from pink-beige to brick red. In the 2009 image, clouds appear as small white puffs of pale blue-green.

Acquired under what might be termed normal conditions, the 2009 image shows a Indus River confined to braided channels. Large expanses of vegetation, supported by irrigation, extend westward past Jhatpat and Nuttal. In the north, only the barest hint of vegetation appears around Sibi.

The image from 2010 shows the Indus River spanning well over 10 kilometers, completely filling the river valley, and spilling over onto nearby land. Floodwaters have created a lake almost as wide as the swollen Indus that inundates Jhatpat. Around Jhatpat and Nuttal, the human-engineered structures create sharp borders between cultivated and uncultivated lands. Along the northwestern. One such border appears immediately northwest of Nuttal, with floodwater pooled on the other side. Floodwaters around Jhatpat appear even more severe than those around Nuttal. Away from the irrigated areas, shallow waters extend as far north as Sibi.