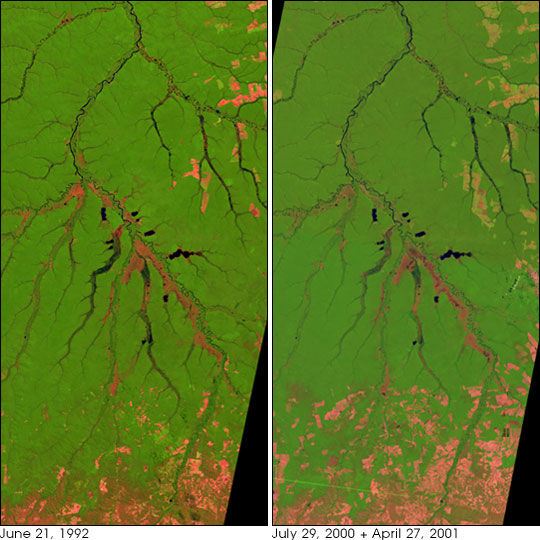 In the northeast part of Mato Grosso state in Brazil, numerous rivers flow together to form the Xingu River. Surrounding the river are 2.64 million hectares of land that form the Xingu National Park and Indigenous Peoples Preserve. The park was set aside in the early 1960s as a way to preserve biodiversity and the traditional way of life for several indigenous tribes. The area is shown in this pair of Landsat images captured nearly a decade apart. The left image was captured in 1992 and the right image is a combination of data from 2000 and 2001.

Evidence of the encroachment of modern agriculture and development is scattered through both scenes, where bright pink rectangles and other shapes show where people have cleared farm and grazing land out of the forest (green). The large cleared plots are typically cattle ranches, while smaller plots are local small-scale farms which typically exhaust the land rapidly and are not sustainable. Since 1992, the cleared area has increased, especially in the terrain to the south. As more and more land nearby comes under cultivation, the integrity of the park is increasingly threatened.

These images were acquired by Landsat 4's Thematic Mapper (TM) sensor on June 21, 1992, and Landsat 7's Enhanced Thematic Mapper Plus (ETM+) on July 29, 2000 and April 27, 2001. The images were joined to make a seamless mosiac with very similar seasonal coverage despite being seperated by a wide period of time. These are false color images made using infrared, near infrared, and red wavelengths (TM/ETM+ bands 5, 4, and 3). Vegetation is green, pink areas are cleared land, and water features like the Xingu River appear dark blue.