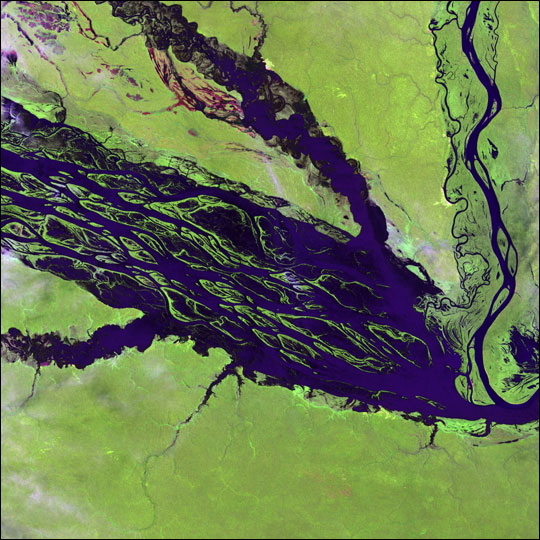 The above Landsat 7 scene shows the Negro River flowing through the eastern edge of Brazil’s Jau National Park. The river is the big strip of blue running from left to right across the image, and the other blue ribbons are tributaries. Originating at the border of Venezuela and Brazil, the Negro River meets up with the Amazon in central Brazil to become its largest tributary. Half-submerged islands can be seen in the center of the river. Between November and April when the river is at its peak, many of these islands disappear.

The land to the left of the river is the eastern edge of the Jau National Park. The park is the largest forest reserve in South America and covers an area greater than 5.6 million acres. Requiring the direct permission of the Brazilian government to enter, the park forms one of the most exquisite examples of tropical rainforest and conservation in the Amazon. It houses spotted jaguars, manatees, pink river dolphins, and numerous other species of animals and plants.

This image was acquired by Landsat 7’s Enhanced Thematic Mapper plus (ETM+) sensor on August 31, 2000. This is a false-color composite image made using shortwave infrared, infrared, and red wavelengths. The image has also been sharpened using the sensor’s panchromatic band.

Image provided by the USGS EROS Data Center Satellite Systems Branch. This image is part of the ongoing Landsat Earth as Art series.